An Indianapolis Public Schools task force says over the next 10 years so few students are expected to be enrolled, that only four out of seven district high schools will be needed.

At a meeting Tuesday evening, members of the task force urged the board of commissioners to consider shuttering three high schools next year, while community members voiced opposition to the proposal and one commissioner advocated for closing even more high schools.

Board president Mary Ann Sullivan agreed that schools needed to be closed and promised that community input would be gathered at a series of meetings to help shape the final decisions. The first such meeting is 6-8 p.m. April 26 at the Glendale Library

“It’s just not good stewardship of public resources to put precious dollars towards empty buildings when we have real live kids that have a very pressing academic need,” Sullivan said.

The closures would save at least $4 million and up to $7 million in facilities expenses, according to district officials.

The downsizing is a response to the district’s slide in student enrollment over the past few decades — a change directly connected to the population decline of Marion County's Center Township.

Around 25,000 students attended 11 IPS high schools in 1969 — a time when district enrollment was more than 100,000 students. Since then, only one high school closed and two were taken over by the state in 2012 due to academic failure and continue to be operated by a charter school company.

The number of students attending the seven remaining high schools has dropped to around 5,000. Overall IPS enrollment is almost 29,000 students this academic year.

The task force says even as young professional are returning to live Downtown, it’s expected they will move to the townships or out of Marion county as their families grow older.

As traditional IPS high schools struggle to attract students, new high schools are opening in the city, such as Purdue Polytechnic and Riverside, a second campus of the popular Herron High School.

IPS Board member Kelly Bentley says all of those factors make her worry the district isn’t going far enough in closing more of the seven high schools.

“I’m just concerned that we are going to continue our resources too thin by leaving too many schools open,” she said.

Yet others rejected or questioned the assumptions made by the task force report.

Jim Scheurich, a professor of urban education studies in the IU School of Education at IUPUI, asked if the task force purposely ignored whether school closings will have an unequal impact by race.

“How can we be in an urban district as racially diverse as we are, and absolutely and totally ignore the issue of race,” he said. “But even more importantly of ignoring race -- there is no analytical discussion of what closing specific schools impact would be on the different racial communities in Indianapolis.”

Adrianne Opp, of the Near Westside, asked whether the impact of Great Places 2020 was considered — a redevelopment plan that is expected to see $84 million invested throughout the city.

“It’s not a maybe situation, they will be affected by it,” Opp said about George Washington High School students if the school would be closed. “We will have students drop out or decrease their enrollment.”

Superintendent Lewis Ferebee says all seven of the district's high school buildings will be considered for closure, including John Marshall and Arlington. Last year, the IPS board planned to make John Marshall a middle school and relocate high school students to Arlington.

A series of meetings will be held through May for the public to offer suggestions.

In June the task force will make a final recommendation in June on which schools to close and how the empty buildings will be reused. Schools will be evaluated on an array of issues, including academic models, transportation costs, building upkeep expense, outstanding bonds, proximity to charter and other schools.

The community meetings will take place at 6-8 p.m.:

Contact WFYI education reporter Eric Weddle at eweddle@wfyi.org or call (317) 614-0470. Follow on Twitter: @ericweddle.
Tags:Indianapolis Public SchoolsSchool Closure
Support independent journalism today. You rely on WFYI to stay informed, and we depend on you to make our work possible. Donate to power our nonprofit reporting today. Give now.

Indianapolis Public Schools will close three high schools in the coming years if the school board approves a recommendation from the administration. But it's not yet clear which schools face shutdown. 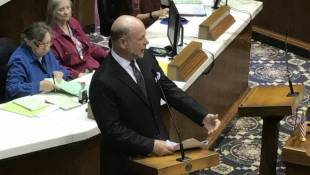 The House advanced a bill to the governor to make the Superintendent of Public Instruction an appointed, rather than elected position.