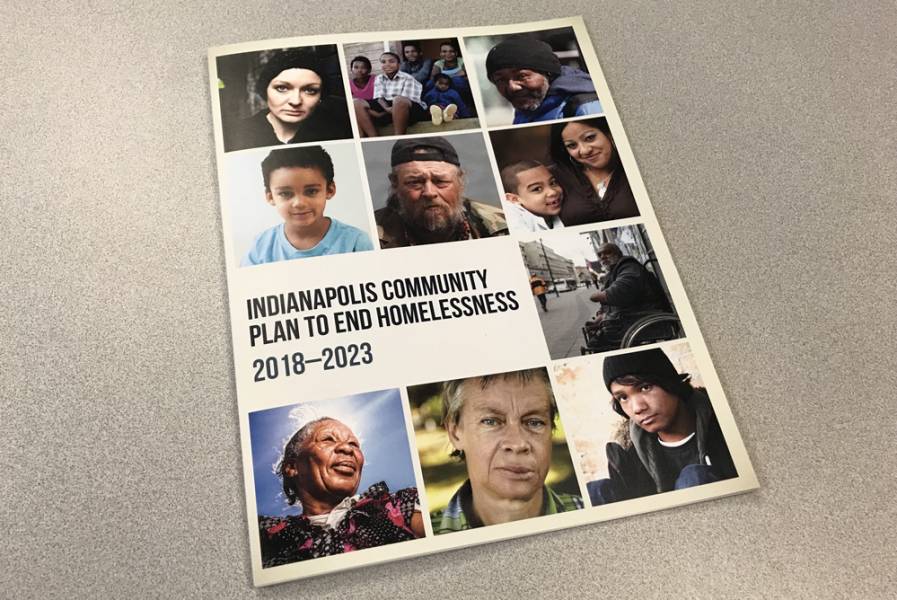 The plan focuses on the creation of "safe, supportive, and permanent housing." CHIP's general approach is guided by the idea that support services offered to those experiencing homelessness are significantly more effective if permanent housing comes first. (Photo by Drew Daudelin)


A five-year plan to end homelessness in Indianapolis was unveiled Thursday.

The Coalition for Homelessness Intervention & Prevention, or CHIP, announced the plan with support from Partners in Housing and city administration.

The plan focuses on the creation of "safe, supportive, and permanent housing." CHIP's general approach is guided by the idea that support services offered to those experiencing homelessness are significantly more effective if permanent housing comes first.

In addition to new permanent housing units (1,110 more) and new rapid rehousing subsidy slots (at least 690 more), the plan calls for expanding and enhancing wraparound services, unifying systems that monitor homelessness, and increasing funding for the Indianapolis Continuum of Care, part of a HUD program comprised of people and organizations working on homelessness.

Executive Director at CHIP Alan Witchey says they've been working on the plan for over a year.

"We had focus groups, surveys...we really talked to people who were experiencing homelessness," Witchey says. "We talked to providers. We talked to other cities that were doing the same kind of work."

Jeff Bennett is Deputy Mayor of Community Development for the City of Indianapolis.

Bennett says the 32-page plan is the culmination of his 15-year career. He says there are thousands of units around the city that can be turned into housing for the homeless.

Funding for this kind of work is typically done with federal grants from the U.S. Department of Housing and Urban Development. But Bennett says local sources have been increasingly present in efforts to stop homelessness, and says the city will pursue more.

Indianapolis Mayor Joe Hogsett says in a statement he believes the city can meet the plan's goal.

“(...) we know that by coming together as one community – faith leaders, business professionals, social services professionals, public servants, and individual citizens – we can prioritize our resources to do just that,” Hogsett says.

Witchey acknowledges that, despite efforts from CHIP and other groups, homelessness rates in Indianapolis have remained stagnant over the last decade, and possibly worsened.

He says that can be attributed to a number of factors.

"In Indianapolis the poverty rate is very high, comparatively speaking," Witchey says. "We have one of the highest eviction rates in the country, also. So tenant's rights are very low here. Once they get evicted they almost always end up in a lower socio-economic neighborhood, and frequently end up homeless."

Witchey says in order to address some of these root causes of homelessness, it’s important to think about the effort as a policy issue. He says sustained partnerships between groups like CHIP and city administration can help make that happen.

And he says the plan was designed with annual evaluations in place, an important detail meant to keep it from becoming solely aspirational.

“We don’t want this to be a plan that sits on a shelf,” Witchey says.

Homelessness in the Indianapolis area cost over $73 million in 2016, according to a report from Indiana University earlier this year. The number represents money spent by health care providers, shelters, and the criminal justice system, among others.

Throughout 2016, an estimated 8,176 people experienced homelessness in the city.

Tags:homelessnessCHIPplanpermanent housing
Support independent journalism today. You rely on WFYI to stay informed, and we depend on you to make our work possible. Donate to power our nonprofit reporting today. Give now.