Indy's Al Hubbard Bows Out Of Consideration For No. 2 U.S. Education Job

Indianapolis philanthropist and school reform advocate Al Hubbard has taken himself out of consideration for the nomination for U.S. Education Department deputy secretary.

Hubbard told WFYI News he’s been undergoing the vetting process for the country’s No. 2 education job for months but the requirements of the Office of Government Ethics would have caused financial complications for his family.

“It would have been extremely costly to us. Once they made it clear what we were going to have to do, we concluded that we couldn’t justify doing it,” Hubbard tells WFYI. “And we were very upset about it, sorry about it, 'cause we were very enthusiastic about it.”

Hubbard’s withdrawal and that he was expected to be nominated soon for the position was first reported by Politico Saturday. The Washington, D.C.-based news site also reported that with Hubbard out of consideration, “the Trump administration is essentially starting from scratch in filling the key spot.”

The Education Department did not immeidatelty respond to a request for comment.

Hubbard, a former economic adviser to President George W. Bush and Indiana Republican Party chairman, played a role in the lead up to the state’s education overhaul ushered in by 2011 Indiana General Assembly.

Some of those reforms included a test-based accountability system for schools and teachers, and the creation of tax-payer funded private school vouchers.

Originally intended as a small program for poor students in failing public schools, the Choice Scholarship Program grew to the largest voucher program in the country with 34,000 students taking part this year.

As NPR and WFYI reported recently, the program remains unreviewed and allows private schools to refuse enrollment to students for numerous reasons, including academic performance, behavior and special needs.

“I am a big supporter of Betsy DeVos, and what she is trying to do, and President Trump and Vice President Pence and what they are trying to do in the whole education area,” Hubbard says.

Hubbard, co-founder, and chairman of the private equity firm E&A Industries Inc., sits on the boards of the Indiana Commission for Higher Education and Lumina Foundation.

He has supported efforts by Indianapolis Public Schools to partner with charter schools and outside groups to open new school models or turnaround failing schools. Hubbard donated to school board candidates who back this reform.

Hubbard, along with wife Kathy, created the Hubbard Life-Changing Teacher Awards to give $25,000 and other financial awards to IPS educators. The latest class of winners was announced last week.

Tags:school vouchersBetsy DeVosAl Hubbard
Support independent journalism today. You rely on WFYI to stay informed, and we depend on you to make our work possible. Donate to power our nonprofit reporting today. Give now. 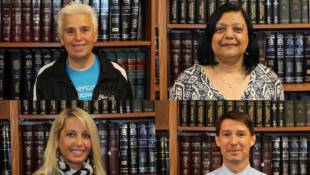 Three IPS teachers and a principal were honored May 31 as Hubbard Life-Changing Educators. Now in its fourth year, the award comes with a $25,000 prize funded by philanthropists Al and Kathy Hubbard.