But the nation’s second-largest insurer left its 2020 earnings forecast unchanged, following a pattern established by its competitors. Insurers haven’t touched their guidance despite big quarterly earnings growth because they aren’t sure what lies ahead.

The COVID-19 pandemic shut down most of the economy in the second quarter, which meant fewer surgery bills or other big claims. But companies expect at least some of those postponed procedures to take place later this year.

Anthem said Wednesday that its adjusted earnings jumped to $9.20 per share in the quarter that ended June 30. Operating revenue, which excludes investment gains, climbed 16% to $29.18 billion. That was lighter than Wall Street’s expectations.

Analysts expected, on average, earnings of $8.77 per share on $29.43 billion in revenue, according to Zacks Investment Research.

That new business injected a $304-million operating gain into the insurer’s second-quarter performance.

But the operating gain from its commercial and specialty insurance business — which excludes government programs like Medicare Advantage — soared nearly 40% to $1.37 billion mainly due to lower benefits use during the pandemic.

Insurers have emphasized that they aren’t hoarding all the money they save from the lack of claims. Anthem’s earnings report, for instance, starts with three dozen bullet points emphasizing things the insurer has done to support customers or care providers.

That includes providing $2.5 billion in financial assistance, as it offered premium credits and waived costs for COVID-19 related care and treatment.

The insurer also set aside some money to help shareholders. It resumed buying back its stock again in late June, a practice that can boost share value. Anthem spent $55 million on share repurchases in the quarter.

For 2020, Anthem still expects adjusted earnings to be greater than $22.30 per share.

Analysts forecast earnings of $22.33 per share, according to FactSet.

Anthem shares have fallen 12% since the beginning of the year. The stock has fallen 11% in the last 12 months.

Elements of this story were generated by Automated Insights (http://automatedinsights.com/ap) using data from Zacks Investment Research. Access a Zacks stock report on ANTM at https://www.zacks.com/ap/ANTM

Tags:Anthemhealth insurancecoronavirusCOVID-19
At WFYI, our goal is to cover stories that matter to you. Our reporting is rooted in facts. It considers all perspectives and is available to everyone. We don't have paywalls, but we do need support. So if unbiased, trusted journalism is important to you, please join us. Donate now. 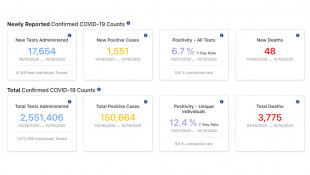 State health officials on Tuesday added 48 coronavirus-related deaths to Indiana's toll, which has growing faster over the past month along with new COVID-19 infections and hospitalizations.
Read More

Niki Angelaki, vice president of treatment services for the Mental Health America of Indiana, spoke with WFYI's Terri Dee about the need for people to stay connected, while setting boundaries and accept ing that they cannot extend themselves as much as they used to.
Read More