A proposal to remake secondary education at Indianapolis Public Schools will leave only four high schools near the city center, out of seven county-wide, and give students the choice to attend one of more than 12 career-focused programs divided among the remaining schools.

The recommendation by Indianapolis Public Schools administration is an effort to redirect $7 million in annual operating costs at under-enrolled high schools into the classroom. It’s also a complex bid to retain students and their families from decades of fleeing the academically struggling district for charter schools, nearby townships and the suburbs.

The district anticipates $13 million in one-time revenue if multiple facilities, including one high school, are sold.

“This is the next step to ensure our students are prepared for college and career,” says IPS Superintendent Lewis Ferebee.

The plan, released today after a 10-month study, would take effect in the 2018-19 academic year if approved by the IPS Board of Commissioners in September. It includes:

Ferebee says there is little choice but to close aging high schools that cost millions to operate even as the district partners with charter school operators to bring two new high schools and one established high school into the district.

In an interview, Ferebee says the district must be “right-sized” in order to offer more academic offerings to students in the schools it operates. Some schools offer only a handful of AP or dual credit courses among a general education curriculum.

The recommendation calls for IPS high schools to be an “all-choice model.” Instead of students assigned a high school based on their home address, they would consult with a school counselor to pick a school based on its academic focus and their interest, Ferebee says.

The creation of “career academies,” Ferebee says, will give the student a leg up in preparing for college or a post-high school job, through tailored coursework and training. The proposed programs range from military to engineering to teaching.

“I believe confidently that allowing (students) to chose their high school experience is the best option for them rather than being determined by where they live,” he says.

The changes are also a bid to keep families from leaving the district for other schools with more robust academic offerings.

In 1968 IPS operated 11 high schools with more than 26,000 students. Today, there are seven high schools John Marshall will operate as a middle school in 2017-18 and less than 5,000 students are expected in class on July 31. District officials say the decline in enrollment is linked to population shift in Marion County since the 1950s.

The IPS task force analyzed criteria about each school to decide when ones to close and remain open. The criteria include the operational costs, location, ability to sell, current academic model, building condition, transportation costs and a number of unpaid bonds on the facility.

Broad Ripple and John Marshall ranked the highest for closure.

Broad Ripple, on the city’s northside, is expected to sell for $6 million to $8 million.

The school “is located at the edge of the district, making it difficult to attract and retain students,” says the task force report. “Further, despite the popularity of the Visual and Performing Arts Academy, most students who attend Broad Ripple do not live in proximity to the school … Thus it does not make financial or practical sense to have the academy housed at the far northern boundary of the district, as transportation costs and run times increase dramatically.

The long-struggling John Marshall, on the Far Eastside, was ranked “the worst,” according to the task force report. The school has “seen a drop in enrollment in IPS from the area, and would create transportation challenges under an all-choice model.”

Additionally, the school has $44 million in deferred maintenance costs, the highest in the district.

Glick Family Foundation is expected to work with the district and city to find a use for the building. The Glick family has made long-term investments in the area, including at School 103 and in the Carriage House Apartment complex.

The proposal calls for selling off two administrative buildings: Forest Manor, at 4501 East 32nd St., for an undisclosed amount and Facilities Maintenance Department, at 1129 East 16th St., for a potential sale of $3 million to $5 million.

Forest Manor staff would be relocated to Arlington Middle School. The Maintenance Department would operate from Northwest Middle School.

In addition, the plan calls for closing two former IPS high schools, Emmerich Manual and Thomas Howe, if they are returned to district control from an ongoing state takeover. Both schools are operated by the Florida-based Charter Schools USA under a contract with the State Board of Education.

IPS staff are expected to hold meetings at the high schools undergoing closure or other changes.

Here are the proposed "career academies" for the 2018-19 school year that students can choose to attend:

Tags:Indianapolis Public SchoolsSchool Closures
Support independent journalism today. You rely on WFYI to stay informed, and we depend on you to make our work possible. Donate to power our nonprofit reporting today. Give now. 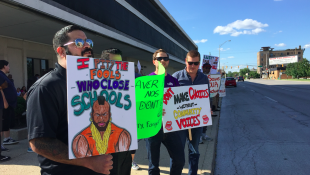 More than 100 protesters gathered outside the Indianapolis Public Schools administrative office Tuesday evening to demand district leaders slow down on an expected plan to close multiple high schools next year.