HB1641 passed the House 60-31. This was the second vote on the bill, the first time it did not pass due to lack of constitutional majority. The bill will now head to the governor's desk.

“I would also challenge us to remember that we're not making laws for IPS. We are making laws for the state of Indiana,” the bill’s author Rep. Bob Behning says. “So we can't customize them just to meet the needs of one school district.”

Indiana law does not permit public schools to participate in the public sale of its buildings in the same way other government entities do. Instead, school corporations must follow specific laws intended to keep the buildings for educational-use only.

IPS officials hope lawmakers loosen these regulations. The bill does give the district a path to sell the vacant buildings – possibly for millions – but with some caveats.

Charter schools can currently purchase an unoccupied school for $1 under a rarely-used state law. The bill also shrinks the time window a vacant school can be bought or leased by a charter school for $1, from 2-years to 90 days.

This bill creates a category for buildings over 200,000 square feet. A charter school may only purchase a building of this size if it can enroll 60% of its occupancy.

For Broad Ripple High School this seems unlikely because of its size and costly utilities.

However, if charter schools cannot meet the 60% enrollment threshold, this bill would allow the district to sell the land to developers for private use. But, a private developer would also be required to build an interested charter school a facility on the property. In this case, a charter school would likely reside alongside residential, office or commercial use.

IPS leaders say this would significantly lower the potential sale price in what’s been called a “once in a generation” redevelopment, possibly upwards of $8 million. They also worry it will drive away investors.

“I really want to see, you know, an unencumbered market,” IPS Director of Special Projects Joe Gramelspacher says. “Tell us what they want to do with that site and how much they would pay.”

Under the bill, the charter school would pay rent at only 50% of market value or reach a deal with the developers. A charter schools’ authorizer would also need to approve the move as fiscally responsible.

The final amendment to the bill specifies the interested charter school must already be opened within a mile of the IPS property to qualify for that provision. Right now, there is only one charter school that qualifies to make a claim on Broad Ripple’s future redevelopment.

Purdue Polytechnic High School has expressed interest in the property, and it opened a temporary north campus location a few blocks away from the closed high school.

“There has been a very strong community voice led by the Broad Ripple Village Association that they want a school there, and Purdue Polytechnic seems to come to the top of the conversation,” says Caitlin Bell, vice president of policy and government affairs with the Institute for Quality Education, a group that advocates for charter schools, “So it would not surprise me that language is maybe tailored for an agreement like that.”

A survey distributed by the Broad Ripple Village Association last summer showed residents would like to see a portion of the 16-acre parcel be used for “scholastic purpose.”

IPS closed under-enrolled Broad Ripple High School to help balance the district’s budget. Now, district leaders say the worst case scenario would be selling the building for $1 to a charter school and still be required to pay off millions in outstanding debt on the property.

HB 1641 does not clarify state law around school district controlled debt, something IPS also wants included to clear the path forward for Broad Ripple High School redevelopment. Now that the bill is headed to Governor Eric Holcomb, the debt clarification won't be included in this bill.

Gramelspacher says IPS wanted to see the a provision that exempts districts that partner with charter schools from having to use the $1 law or current redevelopment restrictions.

“The bill is very problematic for IPS and the community. It doesn't address the debt issue,” Gramelspacher says. “It doesn't allow us to solicit proposals to the free market, unencumbered, no strings attached. So we can actually recognize full market value and take care of the debt.”

If this bill becomes law, however, IPS would still be able to seek redevelopment on the property. A market analysis firm hired by IPS says the location would likely draw investors interested in building mixed-use space in the popular neighbhorhood.

“We can't forget that 1641 offers [IPS] a much better landscape then they have under the current law today,” Bell says.

On the House floor Thursday, HB 1641 did not reach a constitutional majority at 50-38 to pass concurrence. The bill would only require one additional yes vote to reach the governor's desk, and will likely be heard again next week. Several representatives were absent from the vote.

Rep. Ed Delaney (D-Indianapolis) urged lawmakers to consider how this bill may hurt IPS financially, stating the district does not support the bill.

"One way or another IPS –– which is struggling –– is going to lose money," Delaney says.

HB 1641 passed 60-30 Monday afternon, this was the second vote on the bill because it did not pass due to lack of constitutional majority last week. The bill will now head to the governor's desk.

Tags:2019 legislative sessionBroad Ripple High SchoolPurdue PolytechnicCharter SchoolsBroad Ripple
Support independent journalism today. You rely on WFYI to stay informed, and we depend on you to make our work possible. Donate to power our nonprofit reporting today. Give now. 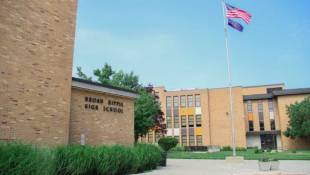 WFYI Education Desk reporter Carter Barrett spoke with Taylor Bennett about what the bill could mean for the future of the site.