Kenneth Allen, a candidate in the competitive race to unseat incumbent Elizabeth Gore for the Indianapolis Public Schools Board of Commissioners’ district-wide at-large seat, used campaign language that suggests his foundation is an active nonprofit. State records indicate it was shuttered nearly 11 years ago.

In August, the 37-year-old Allen launched his campaign with an announcement that said: “For the last 20 years, Kenneth has continued to train young entrepreneurs throughout the United States and across the world through the Kenneth Allen Foundation for Entrepreneurship.”

The first sentence in Allen’s campaign website biography read: “Over the last 20 years, Allen has trained and taught over 10,000 youth entrepreneurs in Trinidad and Tobago, Barbados, Nigeria, Senegal, and all over the US states through his foundation the Kenneth Allen Foundation for Entrepreneurship, Inc. (KAFFE, Inc.).”

Allen founded the Kenneth Allen Foundation for Entrepreneurship, Inc. in 2004 to teach business and financial skills to students, according to public documents. A year later Allen and 12 other people were listed as foundation board members in a state filing.

But a review of public records by WFYI News showed Allen’s foundation filed its last required annual report in 2007. The foundation lost its state operating license in 2010 when the state dissolved it. In 2011 the IRS revoked its federal nonprofit status because required tax documents were not filed for consecutive years.

Allen, in an interview with WFYI News on Friday, said he did not think the campaign materials would lead voters to believe he still runs the nonprofit foundation.

“I don't think it's misleading because we're still doing the work,” Allen said of the campaign biography touting KAFFE, Inc. “We may not be recognized as a 501(c)(3) by the IRS, but we also haven't received any private donations or any solicitations or contributions.”

In the hours following Allen’s interview with WFYI News, his campaign changed language in its online campaign materials and removed all mentions of the foundation from the campaign website. An Aug. 10th press release announcing Allen’s campaign on his Facebook page was also edited to remove all mention of KAFFE, Inc. On Monday, a survey he submitted to Ballotpedia contained the original language that says he helped youth through the KAFFE, Inc. foundation for the last 20 years. 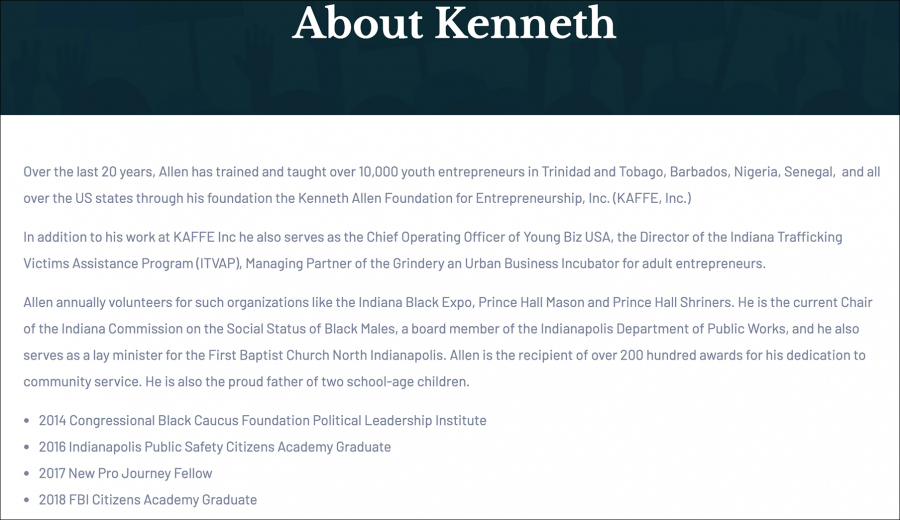 A Facebook page for the foundation featured a KAFFE, Inc. logo and categorized it as a nonprofit organization as of last week. Monday the page was no longer online.

“Mr. Allen never makes any claims or comments stating current activity of KAFFE Inc. He has, in fact, stated that over 10,000 children have been trained through Kenneth Allen and KAFFE Inc.,” Ingram said in an email.

Allen is widely known in the state for rising from a pre-teen selling candy out of his grandfather’s garage in Gary and starting a small home business, to becoming an acclaimed young entrepreneur. Today, Allen is director of the Indiana Trafficking Victims Assistance Program and chairman of the Indiana Commission on the Social Status of Black Males.

He is also the chief operating officer for YoungBiz USA, a for-profit education company based in New York City. YoungBiz USA, according to its website, offers business lessons for students through virtual classes, distance learning and workshops. An Indiana operating license for the out-of-state company was revoked in 2017, according to the state’s public business search website.

Allen maintains he taught business skills to thousands of students through a combination of his foundation, before and after its dissolution, and his work with YoungBiz USA. Allen has worked in various capacities with YoungBiz USA since he was a teenager.

But when asked to explain how KAFFE, Inc. was involved in teaching business skills to students in Nigeria, as he said in an interview with WFYI News and was written on the campaign website before it was changed Friday afternoon, Allen said that was not correct.

“The Kenneth Allen Foundation for Entrepreneurship didn't exist at that time,” Allen said in an interview Friday morning. “But we did use YoungBiz materials.”

Allen said other information in the biography is correct in terms of explaining the depth and type of his work in teaching entrepreneurship and financial literacy to youth.

“The priority, sometimes it's not always around the administrative things,” he said about the continued use of the KAFFE, Inc. name in the years since it was dissolved. “I think that's something we definitely need to look at, particularly as relates to my bios, if that's the impression that it's giving.”

Allen and two other candidates, Ellis Noto and Kendra McKnight, are challenging incumbent Gore for her at-large seat on the November ballot. Gore, who was elected in 2016, has maintained a critical eye on the district’s reforms, specifically its partnerships with charter and nonprofit operators to manage what are known as innovation schools.

Whoever wins, will join the seven-member board and make crucial decisions for the state’s largest school district as it faces the pandemic’s unfolding impact on finances and students’ academic and overall well being.

Allen’s campaign is boosted by support from the Indiana chapter of the national Stand For Children organization and RISE Indy, a locally-based political action committee. Both support innovation schools and other IPS reforms. The organizations are separately paying for social media ads and organizing volunteers to campaign for Allen.

Gore is endorsed by the IPS Community Coalition and the national organization Network for Public Education Action.

The election is Nov. 3. Early voting is underway. 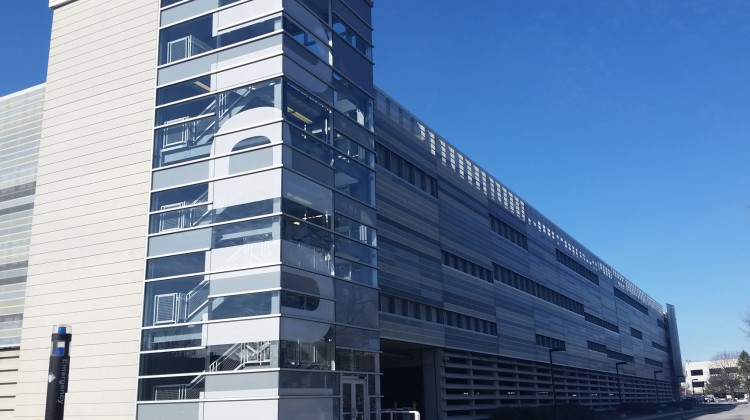