IPS School Board Incumbents Defend Policies Against Challengers In Forum 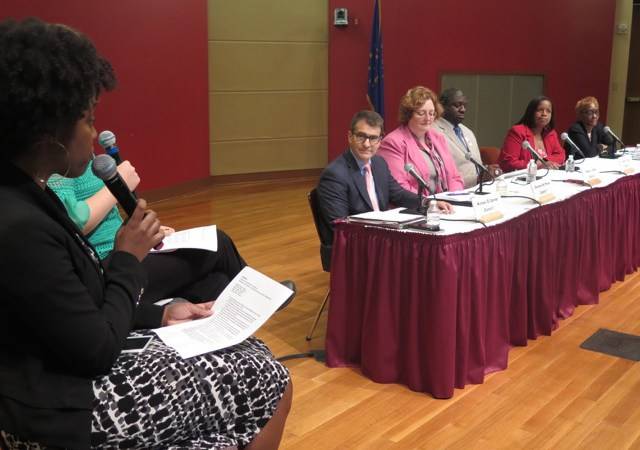 A Wednesday candidate forum hosted by the Central Library and presented in partnership with Chalkbeat Indiana, WFYI Public Media and the Indianapolis Recorder, was the first — and possibly only — time that all ten candidates for Indianapolis School Board have come together to discuss issues facing the district.

There’s a lot at stake for Indianapolis as voters go to the polls November 8 to choose who should run the city’s schools so Wednesday’s discussion was a lively one.

Answering questions from Chalkbeat’s Dylan McCoy, the Recorder’s Ebony Chappel, WFYI’s Eric Weddle and from an audience of about 75 people, several of the challengers argued that current school board — largely controlled by reformers who took power in 2012 — has made changes to fit the vision of wealthy contributors from outside the district, or even outside the state. An example, they said, was a move to create “innovation schools” that allow IPS schools to be run by outside organizations.

Video: Watch a video of the forum

The challengers say the needs and preferences of those who send their children to its schools have been ignored.

“When you have persons who don’t live in Indianapolis sending money for the school board race, that is very concerning,” said Ramon Batts, who is running in IPS District 2, which will be vacated by Gayle Cosby, who is not seeking re-election. “These people make an investment and they want a return on that kind of investment. I don’t think that kind of return should be off the backs of our children.”

But the three incumbents running for re-election — Sam Odle, Diane Arnold and Michael O’Connor — pushed back hard, arguing the changes the current board has made are dramatically improving the district’s schools and making IPS more competitive with neighboring school districts and charter schools.

“We have to operate a school system in a way that it competes for kids,” Odle said. “If we don’t do that, we will continue to decline and decline as families go to where innovation is happening. That’s what families want.”

Odle is a former hospital executive first elected in 2012. He is being challenged by Elizabeth Gore, a former board president who was defeated by Cosby in 2012, and Jim Grim, a long-time advocate for community engagement in schools who works for IUPUI, for an at-large seat on the board.

O’Connor is an Eli Lilly and Company executive and former Indianapolis Deputy Mayor who was appointed to the board when Caitlin Hannon resigned in 2015. He is running in IPS District 1 against Christine Prince, a registered nurse and volunteer.

Arnold, executive director of the Hawthorne Community Center and IPS board president, is being challenged in District 4 by Larry Vaughn, an artist and community activist who is known for sometimes disrupting school board meetings with inflammatory statements.

This is Vaughn’s second run for school board after losing his first bid in 2012.

Three challengers are running for the seat Cosby is vacating in District 2: Ramon Batts, an educator and IPS parent who ran for the board and lost in 2014; Nanci Lacy, an IPS parent and education activist; and Venita Moore, a principal with an Indianapolis business consulting firm.

Here’s what the candidates had to say about some of the key issues facing IPS:

Several of the challengers were critical of Ferebee’s leadership and the board’s decision to reward hims with a 6 percent raise.

Batts said Ferebee does not give parents and others enough opportunity to offer feedback on his plans. His proposals, Batts said, sometimes don’t appear on the school board agenda until just before it meets.

Lacy said parents sometimes have to play detective to learn about major changes proposed for their schools.

“He has not been very forthcoming,” she said of Ferebee. “Parents are still finding out from the media before they hear from the school district that their schools are being closed or being turned into innovation schools. That is not acceptable.”

Ferebee has come under fire for the district’s failure for several days to report to Indiana Department of Child Services when a staff member learned of accusations that an IPS employee was having an illicit relationship with a student. Odle said criticism of Ferebee in a difficult case was unfair.

Spending on school board races

Since 2012, IPS school board races have gone from largely low-cost, self-funded endeavors to professionally-run campaigns, some of which spend tens of thousands of dollars.

“I know from running before it doesn’t take that kind of money to reach families and to be sincere about what you do,” she said.

Other candidates said spending to communicate to voters is justified.

“I think it’s a lot of money but I’m a novice at this,” Moore said. “I’m not truly concerned. I will continue to do the things I need to do to deliver my message.”

But other challengers thought so much money, especially if it comes from people who don’t live in the district, raises concerns.

“It suggests school board members are bought and sold,” Grim said. “That concerns me.”

Grim and Prince said they would refuse such contributions.

“I don’t want to wonder what the agenda is and who I will owe later if I take money that is not local,” Prince said. “It concerns me about divided loyalties. You can look across this nation to see where they have influenced school boards to make changes that don’t represent necessarily the voice of the people.”

O’Connor said he’s seen no signs that his board colleagues are motivated by political contributions.

“I know that none of them are subject to anybody but people they serve in their districts,” he said. “The rumors of for-profit takeover of schools simply aren’t true. Would I rather out-of-state money not come into these races? Absolutely, but it happens because a lot of institutions and people are trying to find a way to make sure the school system works.”

Arnold and Odle also rejected the notion that money is buying influence.

“I would like to think I am very grassroots, and I would not sell our children to the highest bidder,” Arnold said. “Not everybody who takes money are going to sell their souls to these organizations.”

Odle said he hasn’t received any out-of-state money this time, but did last time.

“Those people only asked me for one thing — help make our schools better,” he said. “Being better means better outcomes for out students. They didn’t ask for anything else. That aligns with my values and why I am running.”

Challengers for the board expressed deep skepticism about innovation schools, which are IPS schools that are independently managed under a contract, often by charter school networks.

“We are putting our kids in experimental learning environments,” Lacy said. “A lot of this stuff has not been proven. It’s in a bright new package but we don’t know what’s inside.”

Candidates were particularly critical of a new partnership with Purdue University, which plans to open a new East side high school focused on science, technology, engineering and math.

“When it was announced, I screamed,” Gore said. “We are closing schools. I looked at the boarded up building they are going to put the Purdue school in. That is a waste of money.”

Grim said there were better options the board should have explored to give IPS students who want to learn science a better chance to win a scholarship to Purdue.

“I can’t imagine why we would be contracting with Purdue to provide the funding for them to open another high school in the neighborhood where we have a STEM high school,” he said. “Why didn’t Purdue just partner with Arsenal Tech?”

The current board members said innovation schools are good for IPS students.

“I stand firmly with someone who wants to partner to provide better options and better opportunities for our students,” O’Connor said.

Odle said the critics of that plan don’t understand the opportunity it’s offering.

“Every one of those students, if they graduate from that school, will get a full ride scholarship to Purdue,” he said. “If you talk about 500 poor kids in Indianapolis and they get a scholarship to college? I will vote for that any day.”

Vaughn is known for provocative behavior at public meetings, often delivering inflammatory speeches to the the Indiana legislature, the City-County Council and the IPS school board. He has called board members “child molesters” and used racial slurgs, sometimes resulting in ejection from meetings.

Vaughn said he understands that his words sometimes make people uncomfortable but would not back down from his prior statements.

“I may have said some things not everyone could go along with,” he said. “I said (board members) are interfering in the affairs of our children and injuring them. They are certainly doing that.”

Other candidates, even those that have been endorsed along with Vaughn by organizations like the Indianapolis NAACP and Concerned Clergy, distanced themselves from Vaughn’s strong language.

“It concerns me when there is unprofessional behavior and personal attacks,” Prince said. “I don’t tolerate that. I don’t let people talk to me like that and I don’t talk to people like that. Mr. Vaughn needs to speak for himself and be responsible for that and refrain from that type of behavior.”

Tags:Election 2016Indianapolis Public School Board
At WFYI, our goal is to cover stories that matter to you. Our reporting is rooted in facts. It considers all perspectives and is available to everyone. We don't have paywalls, but we do need support. So if unbiased, trusted journalism is important to you, please join us. Donate now.

A former Purdue University professor and his wife have been sentenced to probation and ordered to pay a combined $1.6 million in restitution after pleading guilty to using more that $1 million in federal research funds for their own personal expenses.
Read More

The American Civil Liberties Union of Indiana is suing officials at a northern Indiana school, alleging that they violated a Black student's constitutional rights by sending him home for wearing a T-shirt emblazoned with the text, "I hope I dont get killed for being Black today."
Read More