A measure passed 95-1 by the House on Tuesday would spare teachers from having performance bonuses withheld due to student scores, which were about 20 percent lower in 2015 due to stringent new standards.

A measure passed 48-1 by the Senate just minutes later would prevent schools from being assigned a lower A-F grade for the same reasons.

Each bill now goes to the other chamber for consideration.

Democratic Rep. Terry Goodin, a school superintendent from Austin, says the measures aren't just a reprieve for teachers. He said they also let GOP leaders off the hook for policies that have not worked.

Tags:Indiana SenateISTEPIndiana House
Support independent journalism today. You rely on WFYI to stay informed, and we depend on you to make our work possible. Donate to power our nonprofit reporting today. Give now. 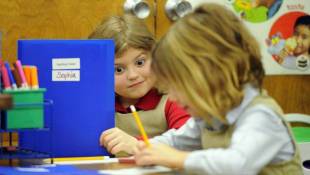 Here's how badly Indiana's schools did on the new ISTEP: Just four of 1,500 public schools that took the 2015 exam had more kids pass than the year before.