INDIANAPOLIS -- Here’s how badly Indiana’s schools did on the new ISTEP: Just four of 1,500 public schools that took the 2015 exam had more kids pass than the year before.

Passing rates sank on nearly every measure after the test was retooled to match tougher standards the state adopted in 2014. In all, 93 percent of public schools that took the test the last two years saw their passing rates drop by at least 10 percentage points. Half of schools saw a drop of 20 percentage points or more.

Almost half of all kids who took the test failed math, English or both. Statewide, the percentage of students who passed both English and math nose-dived by 22 percentage points to 53.5 percent.

Under the prior version of ISTEP, the passing percentage had been going up by a percentage point or two each year for the past three years.

The statewide passing percentage for English tumbled down 13 points in 2015 to 67 percent and math fell 22 points to 61 percent passing. Both were close to the decline the Indiana Department of Education had predicted. The tests are not directly comparable to each other because they are so different, but the data shows the new test is clearly much harder.

State Superintendent Glenda Ritz’s warnings of huge drops to come helped spur a reluctant Gov. Mike Pence and Republican legislative leaders this week to promise to rush a bill that would exempt teachers and schools from consequences for newly low scores.

ISTEP is the backbone of an accountability system that can block teachers from pay raises if their students’ scores don’t rise and sever schools from their school districts under state takeover when they receive years of consecutive F-grades.

But not this year.

A senate bill with broad support would prevent school’s A-F grades from going lower than the grades they received last year and shield teachers from consequences of poor scores earned by their students.

In short, after a long bumpy ride that saw problems with ISTEP’s design, administration and scoring, the state’s schools are getting a mulligan.

That will be a relief to many.

Ritz decried years of changing expectations for students, teachers and schools, but she said they could now build up from this new “benchmark.”

“My top priority is the educational, social and emotional well-being of Hoosier students,” she said in a statement. “That is why I believe that is it time for Indiana to move away from the costly, lengthy, pass/fail ISTEP assessment. The one-size-fits-all high stakes approach of the ISTEP needs to end.”

When it came to the schools that struggled the most with the new ISTEP, many of them were in Marion County.

Four of the 10 schools with the deepest drops in their passing rates were from IPS, and one was from Pike Township.

The passing percentage for IPS School 56, which last year ranked among the best in the district at 82.7 percent, fell a whopping 55 percentage points, the worst in the state. This year just 27.9 percent of its students passed.

Another IPS school, Cold Springs School, wasn’t far behind. At 29.1 percent passing, it fell 48 percentage points from 2014, the second biggest drop in the state.

Just four schools in the state saw a greater percentage of students pass ISTEP in 2015 than the prior year — Tindley Renaissance charter school, Eminence High School in Morgan County, IPS School 107 and a juvenile justice center in South Bend. Two of them were helped because they were recovering from big drops in 2014.

IPS School 107, for example, saw a big decline in scores in 2014, with a pass rate 16 percentage points below the prior year. Scores at School 107 rebounded slightly in 2015. Although just 34 percent of students passed, the rate was up 6.7 points over the year before despite the tougher new exam. That was the state’s second biggest gain.

The numbers for the lowest-scoring schools were bleak. In 2015 there were 18 schools had fewer than 10 percent of their students pass ISTEP, including six IPS schools. There were just three such schools statewide in 2014.

Even so, IPS did have the state’s top-scoring school again.

Like last year, Sidener Gifted Academy, a celebrated IPS magnet school for students who are identified as gifted, was the top-rated school in the state, although its passing rate fell slightly to 95.5 percent passing from 100 percent in 2014.

Sidener wasn’t the only top-scoring school that remained among the state’s highest-scorers even after a dip in its passing rate.

In fact, despite all the changes to ISTEP, many of the usual suspects could be found among the best- and worst-scoring schools.

Including Sidener, six of the top 10 schools from 2014 were back in the top 10 again. Five of the top 10 were from the wealthy Indianapolis suburbs of Carmel and Zionsville. If anything, those districts were even more dominant on the new ISTEP.

For 2016, ISTEP is set for even more changes. The British-based company Pearson has taken over creating the test after more than a decade with CTB/McGraw-Hill. And the test is supposed to include even more sophisticated technology, creating new ways for students to show how they arrived at their answers.

Pearson’s contract runs through 2017. After that, a growing number of lawmakers have raised the idea of scrapping the exam altogether in favor of a shared national exam that students also take in other states.

Tags:ISTEPstandardized testsIndiana
Support independent journalism today. You rely on WFYI to stay informed, and we depend on you to make our work possible. Donate to power our nonprofit reporting today. Give now. 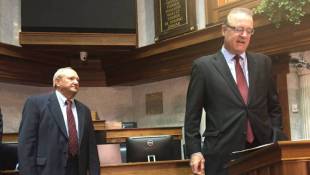 As the General Assembly convened Tuesday for the 2016 legislative session, discussion of how to handle this year's A-F grades was one of the first issues addressed.