LAFAYETTE, Ind. -- Both the Tippecanoe County Commissioners and the Lafayette City Council voted Tuesday to add protections for the transgender community to existing human rights ordinances.

The commissioners must still vote once more this month to make their move final, but the Lafayette vote was the last in what’s been a charged debate.

The packed council chambers in downtown Lafayette were split down the middle, with supporters of the amendment wearing green and opponents wearing white. For more than 90 minutes, green and white took their turns until more than two dozen people spoke.

Members and allies of the transgender community say without a protective ordinance, they’re worried about feeling safe using the bathroom that matches their gender presentation. Opponents— even those who say they support transgender people — insist they’re concerned about non-transgender men using the law as a way to gain access to womens’ restrooms.

Despite the concerns, lone council Republican Jerry Reynolds voted for the law. He said he thinks it would have been approved even if it went to a popular vote, as some commenters pushed for Tuesday.

“I think it would have been probably supported,” Reynolds said. “There’s a lot of people who tell you on the telephone, or tell you person-to-person, that don’t come here and express themself.”

Karen Snyder, who spoke out against the amendment, is certain it will come back to haunt the city.

“I really think that Lafayette made the wrong decision,” she said. “If it happens that a child got molested, then Lafayette will be sued.”

Lafayette will join, among others, West Lafayette, Bloomington and Indianapolis as cities with an ordinance that protects transgender people.

All three Tippecanoe County Commissioners also voted Monday to add gender identity and veteran status to its list of characteristics protected from discrimination.

It was the first of two votes required to amend the county’s human relations ordinance, which has been in place since 2001. It prohibits discrimination by employers, landlords and public entities based on conditions such as race, gender, religion or sexual orientation, and empowers the county human relations commission to investigate and resolve complaints.

Commission vice chair John Metzinger said, since March, the group has been looking at expanding the list of protected citizens.

“Those discussions were initiated as a result of what happened at the General Assembly at the state level where there was an attempt to pass bills that would prohibit localities from adopting this type of ordinance in the future,” Metzinger said. “So we felt there was an urgency for the county to take these actions.”

But, eight of the 13 people who commented Tuesday opposed the amendment, primarily citing concerns about opening the door to abuse in public restrooms.

Lafayette resident Mark Dutton said he has a doctorate in counseling and has worked in the ministry for nearly 30 years.

“And I don’t want some 25-year old transgender man walking into a bathroom with my granddaughter in there and him watching her,” Dutton said.

Commissioner Tom Murtaugh said those fears have not been borne out in Marion and Monroe counties, West Lafayette or 17 other Indiana cities that already prohibit discrimination against transgender people.

“Those bathroom instances — you know, women, children being violated — simply have not come to fruition,” Murtaugh said. “So it really is hard to buy into that argument in my position.”

Murtaugh said it’s important for the county to end a consistent message that the entire community welcomes diverse people. The Commissioners will take a second, and final vote on Monday, Sept. 19.

Tags:Tippecanoe CountyLafayetteLGBT civil rightstransgenderLGBTQ
Support independent journalism today. You rely on WFYI to stay informed, and we depend on you to make our work possible. Donate to power our nonprofit reporting today. Give now. 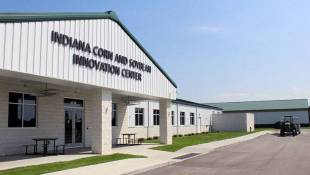 Researchers at the new Indiana Corn and Soybean Innovation Center will study the growing habits of cash crops at the school's 1,400-acre research farm.