The lawsuit is led by the Brennan Center for Justice at NYU’s School of Law, on behalf of local groups that include the League of Women Voters of Indiana and the Indiana chapter of the NAACP.

Secretary Lawson says the only information Indiana law allows her to release is names, addresses, and in which congressional district the voter lives.

But Indiana law also bars those who receive that voter information from sharing it with anyone, except for in political and fundraising activities.

And Brennan Center for Justice counsel Jonathan Brater says Lawson needs to know the commission won’t share the info before she hands it over.

“It’s difficult to see how the commission could make that assurance based on what we know now, which is that they have already said they will be sharing the information received with the general public,” Brater says.

In a statement, Lawson’s office says it can’t comment on a pending lawsuit – but notes the presidential commission has halted its requests for voter data.

Tags:voter registrationConnie LawsonDonald TrumpPresidential Commission on Election IntegrityBrennan Center for Justice
Support independent journalism today. You rely on WFYI to stay informed, and we depend on you to make our work possible. Donate to power our nonprofit reporting today. Give now. 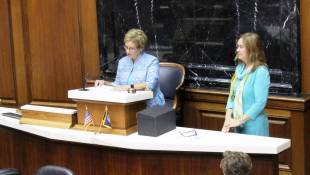 The resolution says the National Association of Secretaries of State is committed to ensuring election security.