State election officials from around the nation sent a decisive message to the federal government about releasing private voter information.

The resolution says the National Association of Secretaries of State is committed to ensuring election security. But it also emphasizes that the U.S. Constitution grants the states autonomy to administer elections.

Indiana Secretary of State Connie Lawson, the association’s new president and a member of the presidential commission, says the resolution underscores the importance of individual state laws.

Lawson said she could not fully comply with the voter information request from Trump’s Commission on Election Integrity at the end of June.

“And so I can only release what is available by law. And that doesn’t not include dates of birth or social security numbers,” Lawson says.

Missouri Secretary of State Jay Ashcroft says the resolution sought to reaffirm that federal officials only want public information. And he says he hopes that calms public fears.

“They should not be concerned, but if they are, I know I can speak for every secretary of state when I say, if you’re concerned, give us a call, we want to help you,” Ashcraft says.

The resolution was sponsored by Connecticut Secretary of State Denise Merrill, the association’s outgoing president.

Tags:Connie LawsonNational Association of Secretaries of StateCommission on Election Integrity
Support independent journalism today. You rely on WFYI to stay informed, and we depend on you to make our work possible. Donate to power our nonprofit reporting today. Give now.

The two plants would serve as a backup for renewable energy sources during times when energy demand is high.
Read More

What Indiana's permitless handgun carry law does and doesn't do

A lot of listeners have questions about Indiana's new permitless handgun carry law, which takes effect Friday. IPB News has answers to some of the most common about what the law does and doesnt do.
Read More 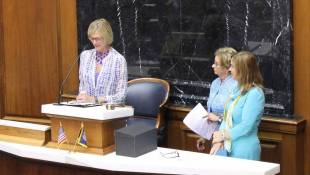