By Annie Ropeik and Nick Janzen

A group of lawyers is asking the Environmental Protection Agency to issue an emergency order about lead contamination in drinking water in East Chicago, Indiana.

The request comes from a nonprofit that made this same request in Flint, Michigan – the Natural Resources Defense Council, NRDC. Now, it’s working with East Chicago residents and their lawyers, and it filed a petition for emergency action with the EPA on Thursday.

“The disastrous effects of lead in our soil have already taken a toll on our community,” said East Chicago resident Sherry Hunter in a press release. “But lead coming through our taps takes this mess to a whole new, unacceptably horrible level. We live in America; we should not be left drinking poison while officials ponder away at long-term solutions. If the city and state cannot help us quickly, it is time for the federal government to help its citizens.”

According to federal guidelines, the EPA has broad, discretionary authority under the Safe Drinking Water Act to intervene when it determines that contaminated drinking water poses an “imminent and substantial endangerment” to human health.

The NRDC says that’s the case in East Chicago, as is the other condition the EPA needs for an emergency order: local and state authorities aren’t doing enough to respond to the hazards.

The EPA released data last fall showing elevated lead levels in the drinking water of 18 homes in the Calumet neighborhood of East Chicago. The neighborhood is part of the agency’s USS Lead Superfund site, which is contaminated with lead and arsenic over 100 times the legal limit.

The EPA has previously said it doesn’t plan to expand water testing in East Chicago. But it did direct the Indiana Department of Environmental Management to increase corrosion controls in the city’s water supply, to protect against leaching from lead pipes.

Local and state authorities have also discussed long-term funding options to improve the pipes, but they haven’t taken action so far.

The EPA released a statement in response to Indiana Public Broadcasting's request for comment.

"EPA has received the petition requesting that the agency take emergency action under the Safe Drinking Water Act in East Chicago, Ind[iana]. EPA will review the petition and will continue to work with the city and state to protect the health of East Chicago residents," an EPA spokesperson said in a statement.

Tags:Environmental Protection AgencyEast Chicagoleadlead contamination
Support independent journalism today. You rely on WFYI to stay informed, and we depend on you to make our work possible. Donate to power our nonprofit reporting today. Give now. 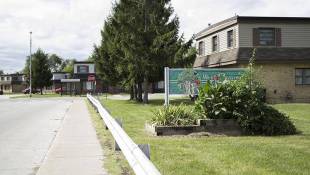 Families who remain in lead-contaminated public housing on April 1 could be moved somewhere temporary while they keep looking for permanent housing.