INDIANAPOLIS – A sister rally of Women’s March on Washington took place on Saturday, drawing in thousands, and a meme posted by an Indiana state senator is drawing more attention.

Sen. Jack Sandlin, R-Indianapolis, shared a meme that read, “In one day, Trump got more fat women out walking, than Michelle Obama did in 8 years” over a picture from the Women’s March on Washington.

A meme is a piece of information that is often spread widely on social media. The post has since been taken down.

“It is unclear to me how this ended up on my page, but I have removed it. This message in no way represents my views toward women, and I sincerely apologize to anyone who may have seen it,” Sandlin said in a statement Monday.

Many took to his Facebook page to express their opinions.

“It truly saddens me that someone in a position such as yours, who is elected as a voice of the people, and has on his own website that they are a person of values and respect, would have something so childish on their page,” Erica Hewitt posted on Sandlin’s Facebook page.

Others said it was posts like the one Sandlin shared that motivated women to march in the first place.

“Strong women come in all shapes and sizes. You are one of the reasons we marched,” Mimi Doherty posted on Sandlin’s page.

Rep. Jim Lucas, R-Seymour, also shared a meme on Sunday that sparked controversy. It was a picture of a police officer spraying a woman in the face that read:  “Participation trophies now in liquid form!” with a comment , “Today’s giggle…”

Lucas has kept the image on his page.

As of Monday afternoon, Sandlin has since made his Facebook page private.

Taylor Brown is a reporter for http://TheStatehouseFile.com, a news website powered by Franklin College journalism students. 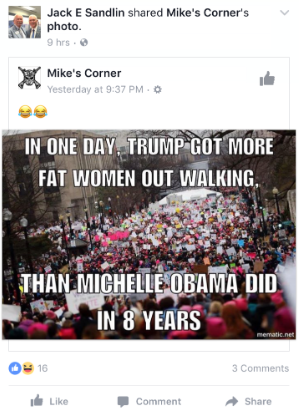 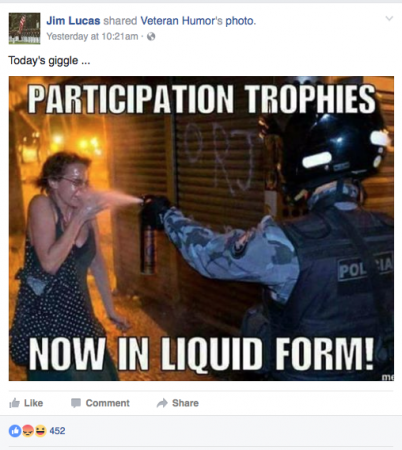 Tags:2017 legislative sessionWomen's MarchWomen's March on WashingtonJack SandlinJim Lucas
Support independent journalism today. You rely on WFYI to stay informed, and we depend on you to make our work possible. Donate to power our nonprofit reporting today. Give now. 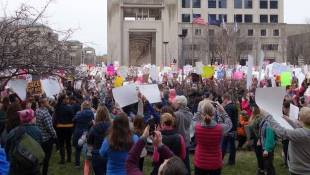 Organizers estimate that more than 10,000 people filled the area around the Indiana Statehouse Saturday - one of hundreds of "sister marches" in cities around the U.S. and the globe to protest the policies and rhetoric of new President Donald Trump.