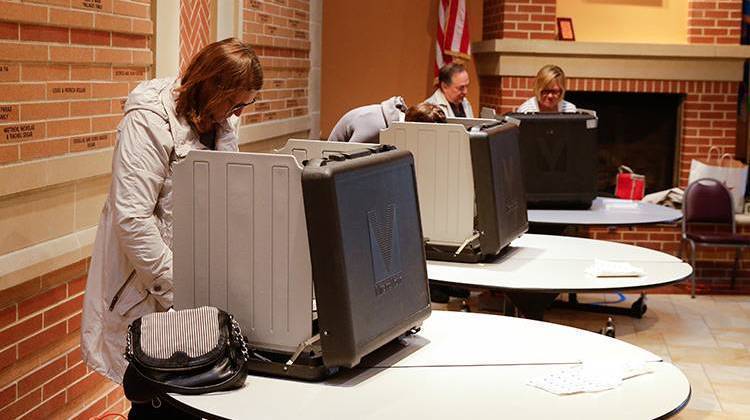 Julia Vaughn, policy director for Common Cause Indiana, says the lack of early voting access has become a constitutional issue, and that it violates the Voting Rights Act of 1965. (AP Photo/Michael Conroy)


Common Cause Indiana and two branches of the NAACP filed a federal lawsuit Tuesday to challenge the law that governs early voting in Marion County.

In 2008, two sites were established outside downtown Indianapolis that offered in-person early voting. But now they're gone, meaning anyone in Marion County who wants to cast an early ballot has to make the trip to a single downtown office.

Julia Vaughn, policy director for Common Cause Indiana, says the lack of access has become a constitutional issue, and that it also violates the Voting Rights Act of 1965.

“The Voting Rights Act says that you can’t apply a law in such a way that voters in some areas have much more access than others,” Vaughn says.

“In all of the counties that surround Marion County, there are multiple locations, in some seven or eight locations, where voters can vote early in-person,” Vaughn says.

In a written statement given to WFYI, Marion County Clerk Myla Eldridge says the county’s election board will review the lawsuit.

Eldridge says her position remains that establishing early voting locations is “an essential component of providing meaningful and convenient access to voting for all Marion County residents."

Barbara Bolling Williams, president of the Indiana State Conference of the NAACP, says in a press release that the Indiana NAACP "is proud to stand here today to announce this challenge because this statute is harming all voters in Marion County but having a particularly pernicious effect on voters of color.”

Vaughn says Common Cause Indiana will have to do a significant amount of research to prove that there has been a particular impact on minority voters.

To pay for that research the group launched a crowdfunding campaign on crowdjustice.com with a goal of $5,000.

The group will only receive their crowdfunding money if they reach that goal by June 1. The page says if it reaches a stretch target of $10,000, Common Cause will have enough "to finish the work and won't have to worry about doing additional fundraising."

Tags:Marion CountyCommon Cause Indianaearly votingGreater Indianapolis NAACPelection board
Support independent journalism today. You rely on WFYI to stay informed, and we depend on you to make our work possible. Donate to power our nonprofit reporting today. Give now.