INDIANAPOLIS -- Donna Price's phone at Indianapolis' Department of Code Enforcement has been ringing a lot in recent months, mostly from people with one question.

"Am I going to have to pay flood insurance?" Price recalled. Her answer: "Probably more no's, but I am saying some yes's too."

The risk of floods along Marion County's 400 miles of streams and rivers has been reanalyzed for the first time in three decades, changing requirements for thousands of properties that have to pay for expensive flood insurance.

"These maps are the most accurate maps we've ever had," Price said.

About 4,200 properties are falling out of the high-risk flood plain, according to new measurements, but the redrawn lines are shading in 2,900 new properties. Indianapolis would not be eligible for federal disaster aid without having these maps in place.

"There was a lot of stream studies that were done," Price said, along with new contour studies to measure elevation and water flows.

For a homeowner in a flood plain and a federally-backed mortgage, flood insurance is required. Premiums can cost thousands of dollars per years. (Insurance is optional for residents who own their homes outright or don't have government-backed loans.)

The preliminary maps can be viewed at floodmaps.in.gov. They need to be approved by Indianapolis' Metropolitan Development Commission and the City-County Council. The maps are slated to go into effect in mid-April.

Homeowners can search by their address to find out if they're in a flood plain on FEMA's website. (Note: Information is based on current maps, not the updated preliminary maps.)

Tags:floodingIndianapolisFEMA
Support independent journalism today. You rely on WFYI to stay informed, and we depend on you to make our work possible. Donate to power our nonprofit reporting today. Give now.

The judge dismissed the lawsuit Monday saying the caseworkers don't have the legal right to bring the claim against DCS. 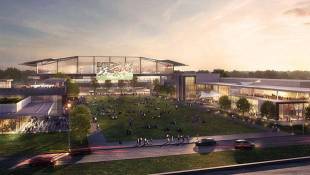 The Airport Authority is delaying a vote on the proposed medical complex until it can "further process community feedback and have additional conversations."