It’s the last week for open enrollment on the Affordable Care Act’s health insurance marketplace as the window closes Dec. 15. Health insurance experts say it’s business as usual, despite a number of changes that have caused some confusion this year.

A shortened enrollment period is the most obvious difference for people signing up on the Marketplace this year. Reduced promotion and federal fighting over repeal of the law has added to uncertainty says Care Source Indiana’s Steve Smitherman.

“I can tell you, our interactions with members across the state,” says Smitherman. “They were under the impression that it’s gone or going away so they couldn’t enroll anymore.”

When enrollment opened last month there was an influx of people says Smitherman.

“For us here in Indiana we’re about 200 percent above where we were last year at this time,” he says.

“The changes are big enough now they should probably go in and see,” says Fairchild. “There is probably an even better plan for them now.”

That’s due to the tax breaks a majority of Hoosiers are eligible for.

Tags:health insuranceAffordable Care Actopen enrollmentObamacare
Support independent journalism today. You rely on WFYI to stay informed, and we depend on you to make our work possible. Donate to power our nonprofit reporting today. Give now. 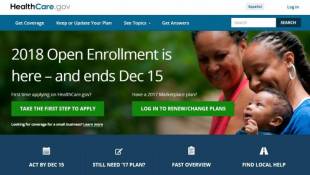 The Affordable Care Act has been through the legislative wringer this year, and there are plenty of changes this period for people buying insurance on the marketplace.