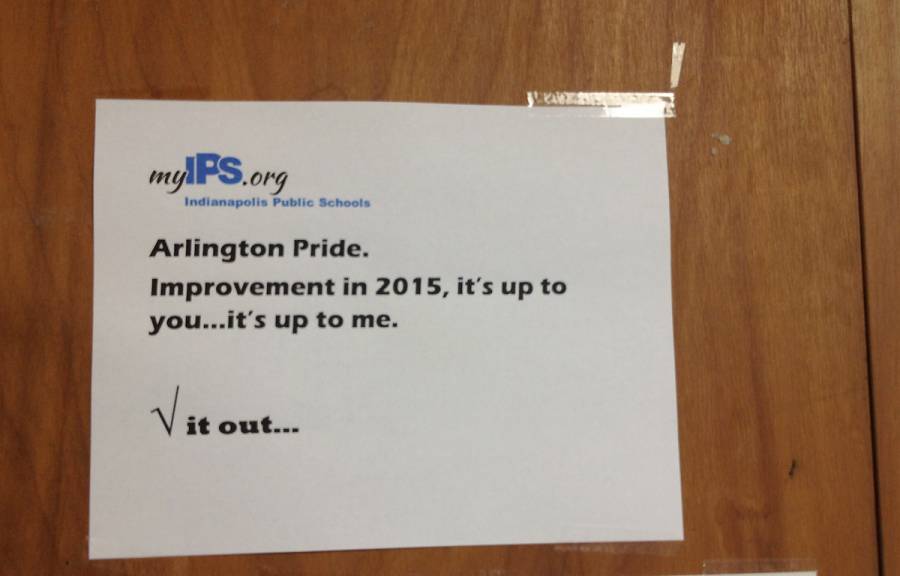 After three years under management of a private company, Arlington Community High School has returned to Indianapolis Public Schools. It’s the first school under state takeover to transition back to its home district and school leaders are under pressure from the community and state to make it work. In the series A New Day, WFYI education reporter Eric Weddle is spending a year reporting from inside the school on its successes and challenges.

During a meeting last week, Arlington Community High School teachers took part in an ice breaker game where one jokingly asked, "who's had an issue with a student this year?"

Amidst the roar of laughter emerged one sarcastic voice: “This year, how about today?”

The gallows humor was a signal to the two members of the Peace Learning Center holding the meeting that teachers at Arlington are frustrated.

And that’s not just because some students act out with foul language, violence or an indifference to their education, but that the teachers aren’t quite sure how to help these students learn and shape up.

Iesha Billups, an instructional coach, says she and others have a “save everyone”-outlook but it’s nearly impossible to carry out at the school as staff and the students are still in the early stages of building relationships.

“We kind of just stepped into it,” she says of the new school year.

Getting students to have empathy is vital, she says.

“'So if you wouldn’t want me to do this or say this to you, why would you want to say it to me or do it to someone else?,'” she says, as an example of the barriers staff have with students.

Arlington faces a rocky start since it opened August 3 under the control of Indianapolis Public Schools. Three years earlier the state hired a charter company to run the school after years of chronic failure. But that company backed out over a funding dispute with state officials.

Now with 611 students and a nearly full staff roster, school leaders are looking to “restart” the school culture when classes resume after fall break and set a new tone at the Northeast side school.

So, the Peace Learning Center is coming to Arlington to teach students how to control their emotions and resolve conflict through a peer mediation program. Since 1997, the center has worked with schools, juvenile correctional facilities and community groups to teach peaceful resolution of conflicts.

James Taylor, better known as JT, and fellow Peace Learning Center coworkers will soon become familiar faces at Arlington.  The center is already at IPS Schools 15, 39, 51, and 58 as part of the OneIndy Program focus on the six high crime areas identified by city officials. Arlington is not located in one of those zones.

The biggest challenge for teachers to promote a new culture, Taylor says, is having the time and freedom to learn it and put it in practice.

“That's is what all of the teachers I have worked with have said. It is just difficult to impose one more thing on their time,” says Taylor, a youth development facilitator. “They've got so much that is not directly related to teaching, in my point of view, but they have to do it."

It’s an approach used across the nation where all types of students -- from those with straight A's to those at risk -- learn how to get classmates resolving differences in a peaceful manner without escalating to violence.

In addition, the Peace Learning staff will discuss conflict resolution during regular class time. Arlington teachers will also get coaching on how to interact with students and use restorative justice -- a method where students or even families sit down with each other to work out problems and find solutions.

“We are going to be working with the staff...and with the students to try to help them gain the skills to make critical thinking choices which for me is: self esteem, self control and self-respect,” Taylor says.

The center has proven results.

After a 12-week program at Irvington Community High School in the 2012-13 school year, freshman behavior referrals decreased by nearly 70 percent.

Principal Stan Law is hoping to see that type of impact at Arlington with all grade levels. This and other culture changes will start to get in effect when classes resume after fall break on October 20th.

“The beginning of the year was the relaunch -- now it’s the restart because we noticed a lot of the pieces we did not have in place, a lot of teachers weren’t there,” Law says, noting that some staff vacancies remain. “But there are a lot more pieces to the puzzle now than were during the first couple weeks of school.”

Law says everyone in the building -- from seventh graders to seniors -- will be held to the same higher standards in their behavior. Teachers will also be expected to enforce the same rules and classroom expectations across the building.

Law is also now able to hire additional staff. Last month he asked the district for more than 20 additional staff to help cull the daily disruptions caused by groups of students, including those who skip classes and hide throughout the building. The district approved:

Tags:Indianapolis Public SchoolsArlington Community High SchoolA New DayPeace Learning Center
Support independent journalism today. You rely on WFYI to stay informed, and we depend on you to make our work possible. Donate to power our nonprofit reporting today. Give now.