The National Association of State Boards of Education is looking toward standardizing school response to lead contamination.

After a number of incidents gained national attention in recent years, the NASBE says it can no longer look at lead in schools as isolated incidents.

Currently, there is no set protocol for handling a lead contamination crisis in a school.

The NASBE will raise the topic at the national meeting this Fall. Director Kristen Amundson says the idea has been percolating since the Flint’s lead crisis.

“It was very very quickly supported by board members across the country who said, you know that’s a problem in my state too,” Amundson says.

The Indiana State Board of Education is a member of NASBE.

In northwest Indiana, School City of East Chicago just relocated elementary school students who attended a school next to a lead contamination site. The SBOE loaded that district 3 million dollars to remodel the school’s new location, a former middle school.

Indiana State Board of Education spokesman Brian Murphy says he appreciates the national group looking into the issue. Still, he says the state was able to quickly move East Chicago students and get the district disaster relief funding without using any national protocol.

Tags:East ChicagoleadNational Association of State Boards of EducationNASBESchool City of East ChicagoCarrie Gosch Elementary
Support independent journalism today. You rely on WFYI to stay informed, and we depend on you to make our work possible. Donate to power our nonprofit reporting today. Give now. 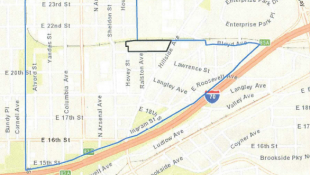 The Environmental Protection Agency says it will begin removing lead-tainted soil later this month from as many as 100 homes around the site of an old industrial smelter in the Martindale-Brightwood neighborhood.