In a near Eastside Indianapolis neighborhood, Robert Fry hands out trash bags to volunteers during a Thursday night cleanup walk. He spent time in this neighborhood as a child and now he’s been hired to lead efforts to disrupt the spread of violence and create closer communities.

Fry is one of two recently hired Community Resource Coordinators, also known as “peacemakers.” He’s been hired to serve in Indianapolis’ most violent and underserved communities to connect residents with resources, including mentoring services and job placement.

As a teen, Fry was exposed to gun violence and illegal activity. His best friend was murdered. And the Brightwood neighborhood, where the walk took place, has recently seen an uptick in violent crime. Fry hopes the cleanup walk will help neighbors form relationships.

“If we can get neighbors involved in cleaning up their neighborhood they’re going to take some responsibility and pride where they live,” Fry says.

Fry says he’s spent the first month on the job getting out into the community and making people aware of his role. His next plans include organizing youth and adult employment fairs.

“It starts with economics," Fry says. "If we can get them employed and get them educated, they’re less likely to commit crimes.”

Last week, Mayor Joe Hogsett announced five grassroots organizations that work to reduce violence in the city would receive $60,000 each.

Tags:Indy PeacemakersMartindale-BrightwoodRobert Fry
Support independent journalism today. You rely on WFYI to stay informed, and we depend on you to make our work possible. Donate to power our nonprofit reporting today. Give now. 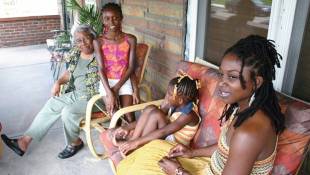 Reviving the Spirit: The Story of Martindale-Brightwood

"Reviving the Spirit: The Story of Martindale-Brightwood" illuminates the rich history of this northeast side neighborhood and captures the determination of today’s residents to maintain the pride and stability that have long been the hallmarks of their community.