Why Should I Care? The Voter Project: Non-Voter Considers First Election

With elections quickly approaching and Indiana’s low voter turnout a topic of concern, 90.1 WFYI has been following one non-voter, Sara Hill as she decides to vote-or not to vote. For our story, reporter Jill Sheridan put Hill together with a political expert, and brings us this story.

NOBLESVILLE -- Sara Hill has never voted and the first election she is considering is hardly an attention grabber.

"A lot of it for me is still just being educated and knowing what’s going on and where to find the resources," Hill said.

A quick Google search of the five candidates vying for at large seats on the city council in Noblesville, where Hill lives, won’t garner you a lot of information.  Only two have websites, there have been no candidate forums and the candidates haven’t raised – or spent – very much money.

So how easy is it for someone like Hill to cast an educated vote if the information isn’t more readily available?

Assistant Professor of Political Science at the University of Indianapolis, Laura Merrifield Albright, told Hill it shouldn’t all be on the voter.

"Knowledge is power but knowledge also requires initiative, candidates have to play a large role, the fact that we have partisan local elections which not every place has, you have parties involved so they should be getting out there educating voters on their platform, what they’re doing," Merrifield Albright said.

The Hamilton County Democratic Party is not actively promoting the two Democrat candidates running for council seats, even though the Noblesville council is expanding from seven to nine seats after recent redistricting.

"Even though it’s maybe not the exciting, attention-grabbing issues, they are the things that are the daily interactions with government, the things that might matter most if we thought about it that way," Merrifield Albright said.

Hill agrees those are things she values in Noblesville.

"We go to the park often and use the library, if the money’s not going there and it’s going somewhere else then those programs aren’t funded," she said.

"You just simply say you want to vote early, and then you’re able to cast your ballot in the time limit they give,"  she explained.

Under Indiana law, voters have up to 28 days before Election Day to vote early. But in most counties, the option is only available at the clerk’s office, even though each county election board has the power to establish satellite early voting sites. Some elected officials have pushed – so far unsuccessfully – to  change the laws governing early voting and voter registration, arguing that it would increase the state’s low voter turnout.

Indiana also has some of the shortest poll hours in the country. That’s fueling Hill’s anxiety about getting home from her job, picking up her son from daycare and getting to her polling place before it closes at 6 p.m. Merrifield Albright says polling hours are an issue that the state should address.

"I think we have to make politics more accessible because it does involve you, making it easier to get to, because you might not have that interest otherwise,"  Merrifield Albright said.

In a Republican-dominated city like Noblesville the primary election is often the more competitive race, and that leads to low voter turnout in November.  Carmel isn’t even holding general elections because there are no Democrats contesting Republican-held seats.

Last general election, Hamilton County had a 28 percent turnout, slightly bellow the state average of 30 percent.  Will Hill add to the numbers?  We’ll find out on Election Day.

Tags:Election 2015Why Should I Care?Electing Our Future
At WFYI, our goal is to cover stories that matter to you. Our reporting is rooted in facts. It considers all perspectives and is available to everyone. We don't have paywalls, but we do need support. So if unbiased, trusted journalism is important to you, please join us. Donate now. 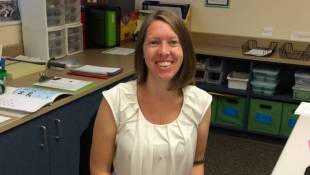