A week after two tornadoes tore through Kokomo, more than a dozen people are still housed in the city’s emergency shelter.

“Our emergency shelter had somewhere around 15, 17 as of last night,” says Kokomo Mayor Greg Goodnight. “But there are obviously dozens of people or more that are displaced.”

The tornadoes downed hundreds of trees and damaged more than a thousand homes on Aug. 24.

Officials don’t yet have an estimate of how much cleanup will cost. Goodnight says that’s in part because some damage is still being discovered.

Goodnight says he met with one man who thought his property had only lost a few trees, with his home emerging from the strong winds unscathed.

“A day or two after the power came on, they go and they start noticing things like the cabinet doors weren’t shutting properly, some of the windows would not open because there’d been somewhat of a shift in the foundation.”

No one was seriously hurt or killed in the storms. Goodnight says that’s been good for morale, but he’s concerned it might change the amount of money the city gets for repair.

“So I think it’s worked to our benefit as far as the spirits of the community...Could it also make it where it’s just structures and people take it a little more lightly? I guess that’s always a possibility.”

Goodnight says crews are still removing downed trees and he estimates the cleanup is about half-done, even with the addition of resources such as dump trucks and heavy machinery loaned from other Indiana municipalities.

Tags:severe weatherHoward CountyKokomotornadoesGreg Goodnight
Support independent journalism today. You rely on WFYI to stay informed, and we depend on you to make our work possible. Donate to power our nonprofit reporting today. Give now. 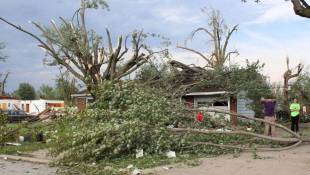 The American Red Cross setup a shelter at the Kokomo Event and Conference Center for those displaced.