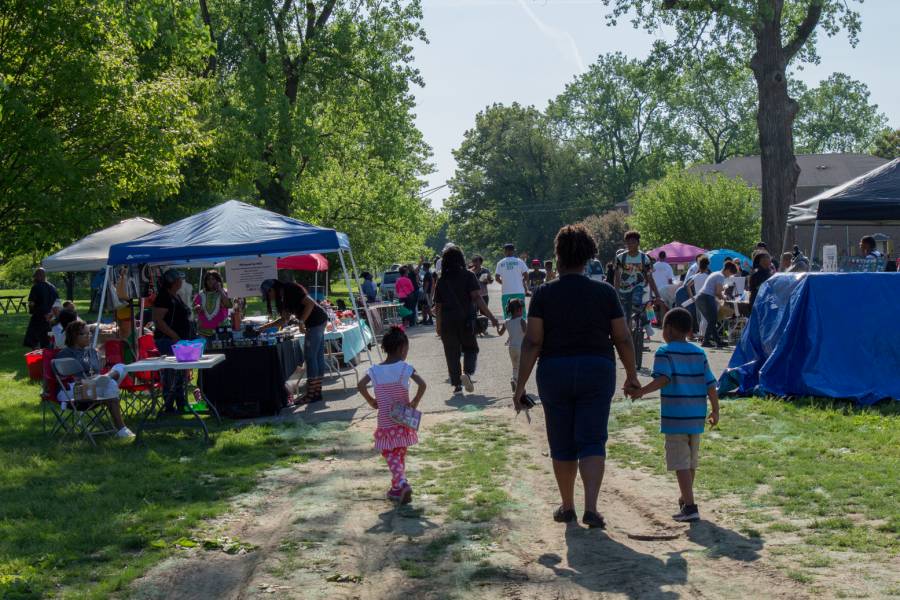 Visitors at the latest Open Bite Night, in the MLK neighborhood near downtown Indianapolis, walk by some of the 22 vendors selling jewelry, clothes and social service programs. (Photo by Drew Daudelin)


Ro and Earl Townsend live in what some call the MLK neighborhood, northwest of downtown Indianapolis. It’s one of the poorest areas in the city. They're known for hosting fine dining events, starting an open-mic poetry show, and handing out bags of food to hungry kids.

These are all fairly manageable side projects for the couple, who are also raising five children.

But their latest project got really big, really fast.

It started with barbecue cookouts. The parties were getting popular, so Ro enlisted help from cooks in the neighborhood, called it Open Bite Night, and posted about it on social media.

"We were expecting it to be a bigger cookout kind of a deal," Ro says. "And then it just turned into something else."

About 300 people showed up to their home. They decided to throw another Open Bite Night a few months later, on a blocked off neighborhood street. It attracted 1,100 people, and Ro says even more couldn’t come because there was nowhere left to park.

"It was apparently something that the neighborhood really wanted," Ro says.

Now, less than a year after that first party, Ro and Earl have partnered with Flanner House, a social service agency at the nearby Watkins Park, to give the event the space it needs. 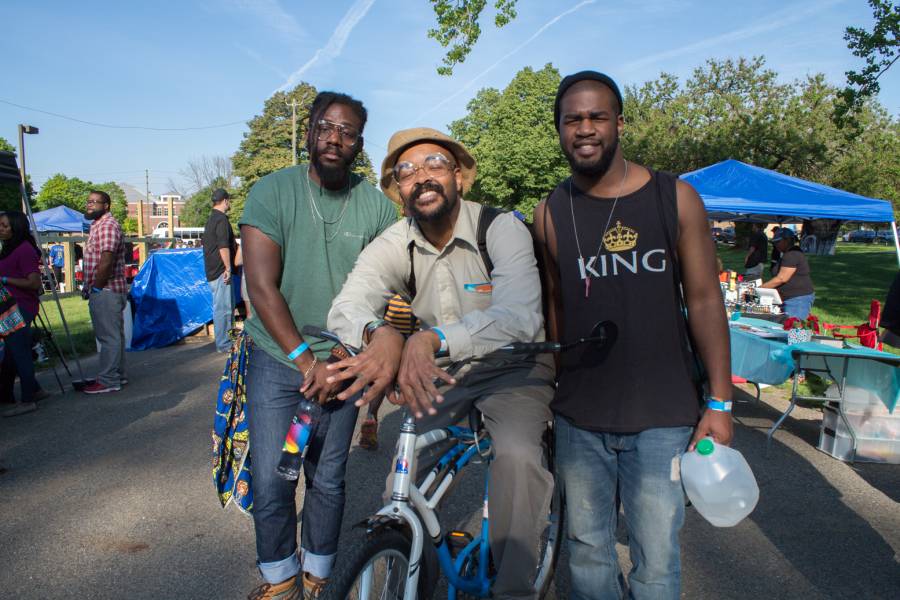 About 2,000 people showed up to the latest Open Bite Night, less than one year after the surprise success of Ro and Earl's first party. (Photo by Drew Daudelin)


The latest Open Bite Night is a lot of things put together. It’s a six-hour outdoor party with 15 local cooks, 22 vendors, and 25 performers doing music and poetry.

Many of those people live in the surrounding neighborhood. Ro says she wants to showcase local, unknown talents. And she also wants to turn those talents into jobs.

Earl talks with pride about locals who used previous Open Bite Nights as a launching pad – one now caters for Eli Lilly, another for Heron. Another has now opened her own seafood restaurant.

"And it just expands your sphere of influence," Earl says. "It’s an amazing thing to watch, and it’s so simple. It’s so simple." 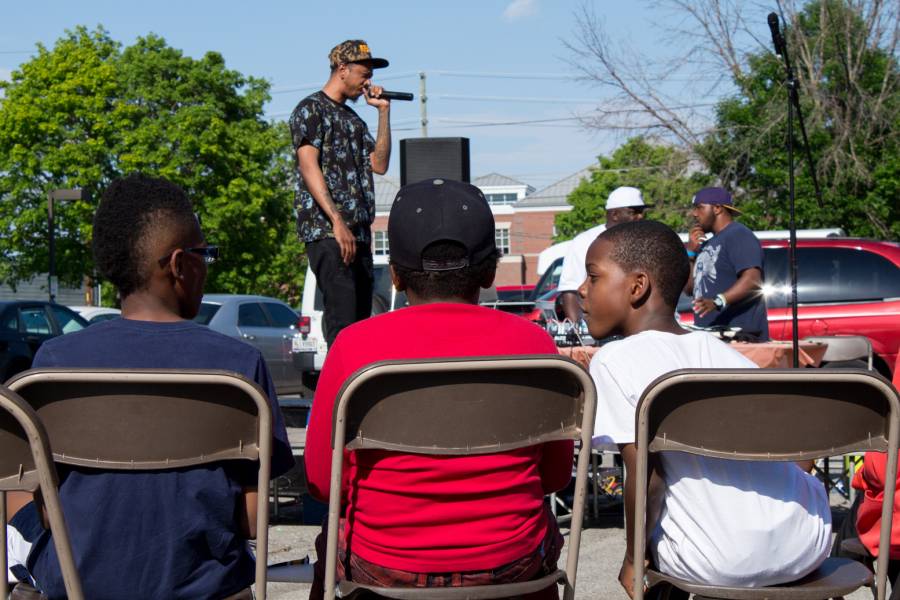 A rotating lineup of musicians and poets provided a soundtrack for the six-hour festival. (Photo by Drew Daudelin)


Ro and Earl are on the move for hours. They wear matching turquoise shirts with their names emblazoned on the back, shaking hands and hugging friends.

One of those friends is DeAmon Harges, who lives in the neighborhood.

Harges runs The Learning Tree, a local group focused on what some call asset-based community development. The approach is fueled by the idea that disenfranchised neighborhoods should be worked on from the inside, not just from outside institutions like United Way.

Harges says Open Bite Night is a great example of the asset-based philosophy in action, because it's both organized and run by people in the community. And he says the event’s immediate and organic growth – this third installment attracted over 2,000 people – is evidence of its power.

"I think it also brings people to be their truer self," Harges says. "So when people can relax, and laugh, and listen to entertainment, they hear things through a different lens, not on guard. You don’t see many tables around. What you see are people walking side by side." 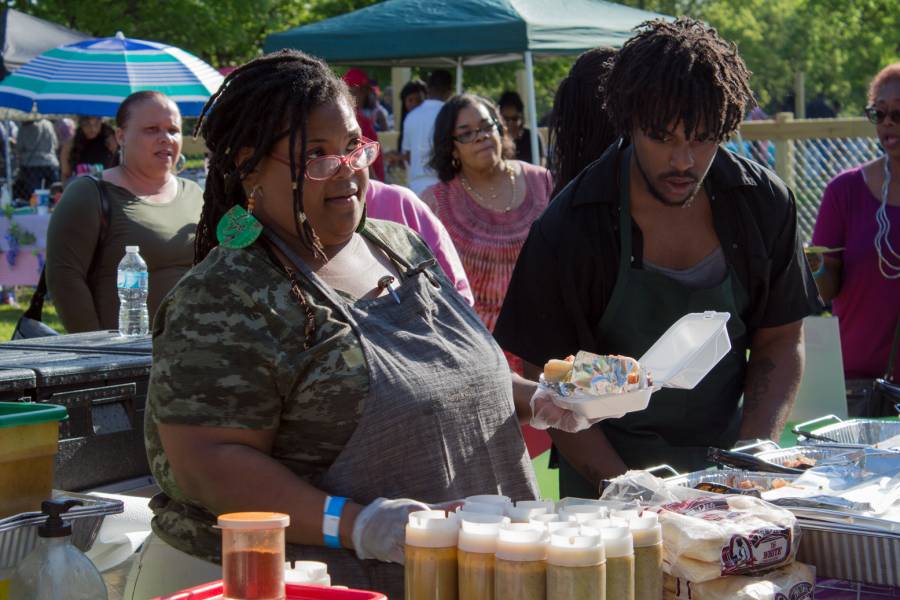 Oya Woodruff, who cooked in a previous Open Bite Night, has since opened a seafood restaraunt called The Trap. She was the featured chef at the latest event. (Photo by Drew Daudelin)


Michael Mather is a friend of Harges, and a pastor at a neighborhood church. He's a strong advocate for asset-based community development. But it's a relatively new belief.

Mather worked for years on after-school programs, a fitting symbol for the traditional community development model, and says he was ultimately confronted with the realization that its impact wasn't enough.

"People are often told, in communities like this, that they don't have power, and they need help from other people and institutions," Mather says. "Well we all need help, all of us do. But this gives people a way to be reminded that they have real power and gifts to offer."

Mather says Ro and Earl’s unique partnership with the social service agency, which provided space but took no control over the event, is encouraging.

"We talk about government officials, and social service agencies, as public servants," Mather says. "Well we’ve acted like masters. And this is an example of an institution acting like a servant."

Mather says when his church fills out grant requests, one question always pops up: ‘What’s the biggest need among the group you’re serving?’

The answer, he says he’s learned, is to be needed.

"Because that’s what we all want," Mather says. "Everybody wants to be useful. Just seeing that, noticing that, investing in that, makes things better, I think." 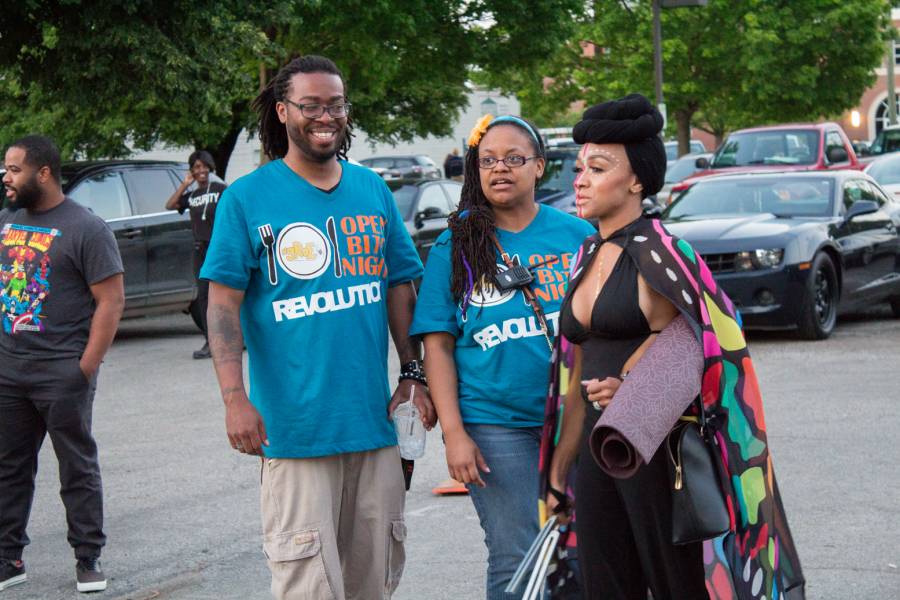 Ro (middle) and Earl (left) talk to a performer before she heads to the stage. (Photo by Drew Daudelin)

Tags:Chasing the DreamOpen Bite NightRo and Earl TownsendMLK neighborhoodfood festivalasset-based community development
Support independent journalism today. You rely on WFYI to stay informed, and we depend on you to make our work possible. Donate to power our nonprofit reporting today. Give now.