Vice President Mike Pence spoke to a crowd of hundreds at the American Legion’s national convention in Indianapolis Wednesday. He made a case for the Trump administration’s re-election in 2020.

He contrasted that work against some Democrats in Congress, who he says advocate for “a system that has impoverished millions.”

“It was freedom, not socialism that gave us the strongest and most prosperous nation in the history of the world – it was freedom,” Pence says.

Pence says that progress would be undone by losing in 2020. He asked the crowd to engage with younger voters.

Tags:Mike PenceAmerican Legion
At WFYI, our goal is to cover stories that matter to you. Our reporting is rooted in facts. It considers all perspectives and is available to everyone. We don't have paywalls, but we do need support. So if unbiased, trusted journalism is important to you, please join us. Donate now.

It's unlikely the General Assembly will give counties more money in the 2020 session for new voting machines.
Read More

Gov. Eric Holcomb filed paperwork Tuesday for the Republican nomination seeking a second term in the 2020 election but said afterward it was all premature to say whether he would endorse a challenger to embattled Republican Attorney General Curtis Hill.
Read More 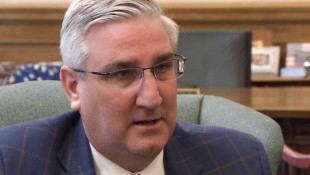 Holcomb On Holding Teacher Pay Until 2021: 'I Want To See The Numbers'