A judge’s ruling halting parts of the state’s new anti-abortion law is, in the words of retiring Indiana Planned Parenthood CEO Betty Cockrum, a “fine last hurrah” for her.

Federal Judge Sarah Evans Barker halted three provisions of Indiana’s 2017 anti-abortion law dealing with underage girls who seek abortions. Barker, a Reagan appointee, said one created an undue burden on those young women, another was too vague to enforce, and the third violated the First Amendment.

It’s the fifth time in seven years a judge has struck down Indiana abortion legislation – all stemming from lawsuits filed by Planned Parenthood and its Indiana and Kentucky CEO Betty Cockrum, who’s stepping aside after 15 years in that job.

Cockrum says the ruling is a victory for young women dealing with what she calls “an incredibly difficult situation.”

“The persons in the Statehouse who think it’s okay to put these things in state law have no notion of what they’re going through. It lacks intelligence and it lacks compassion,” Cockrum says.

Indiana Right to Life decries the ruling and blames Barker, whom the group calls a “liberal activist judge.”

In a statement, Indiana Attorney General Curtis Hill says the ruling will force minor girls to “go it alone” with their abortions. Hill says the state will continue to defend Hoosier parents.

A spokesperson for Gov. Eric Holcomb says only they’re aware of the ruling and reviewing it.

Tags:ACLU of IndianaSarah Evans BarkerCurtis HillIndiana abortion lawPlanned Parenthood of Indiana and KentuckyBetty Cockrumparental notification
Support independent journalism today. You rely on WFYI to stay informed, and we depend on you to make our work possible. Donate to power our nonprofit reporting today. Give now. 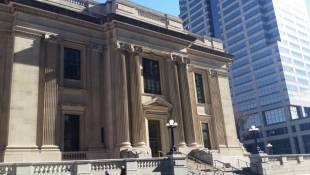 Judge Sarah Evans Barker issued a temporary injunction to prevent the state from enforcing three provisions of the controversial measure.