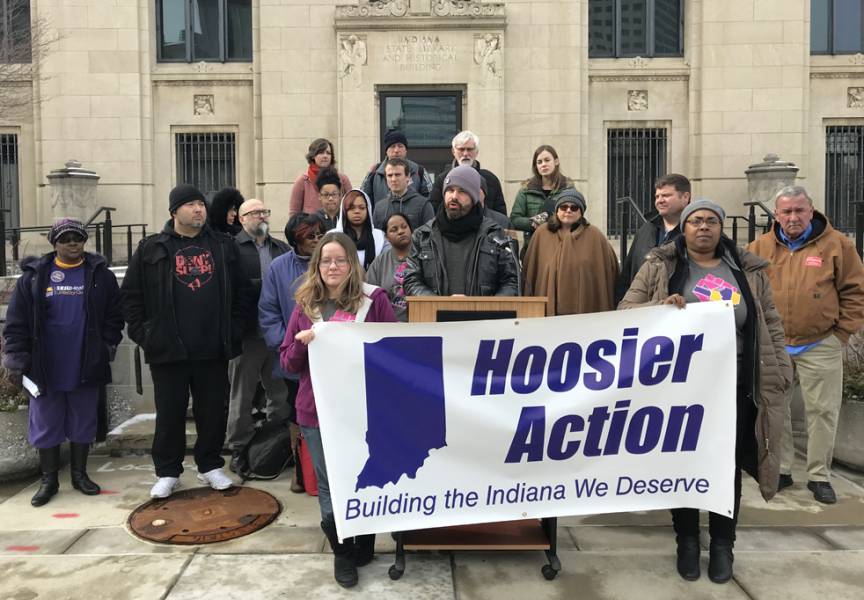 
The political activist group Hoosier Action outlined its legislative agenda Tuesday at a press conference outside the Indiana Statehouse.

Members of the group talked about societal issues surrounding poverty, like predatory loan companies and access to food stamps.

Jesse Myerson is outreach director for the group. Myerson says it strongly condemns one proposed bill that would increase the severity of the crime for drug dealers if the deal results in the death of a user.

Incarceration, Myerson says, is not the answer.

"It does not get people off of drugs. It only increases the windfall profits that are being reaped by the people who benefit from incarceration," Myerson says. "And it does nothing to receive reparations for the people who’ve been harmed by these predatory pharmaceutical companies getting people hooked on drugs."

The legislative session is about halfway done, so some legislation the group hoped would pass has already been set aside, like the Pregnancy and Childbirth Discrimination Bill and the Small Loan Finance Charges Bill.

Tags:opioid crisisHoosier Actionpolitical activist group
Support independent journalism today. You rely on WFYI to stay informed, and we depend on you to make our work possible. Donate to power our nonprofit reporting today. Give now.

Gov. Eric Holcomb is appealing a judge's ruling in his emergency powers lawsuit against the General Assembly.
Read More

September unemployment improves, but still a lot of open jobs and not enough workers

Indiana's unemployment rate for September was 4 percent, dropping very slightly from the month before.
Read More

The Indiana General Assembly has two new members, one a Republican and one a Democrat. Private political caucuses chose people Thursday night to fill the terms of two lawmakers no longer in the legislature.
Read More