Ports of Indiana officials are hoping a successful 2017 sets the stage for more growth this year.

The Ports of Indiana handled 11.8 million tons of cargo in 2017 – a 5 percent increase from the previous year and the second highest annual shipment total between the three ports. This marks the fourth consecutive year the organization exceeded the 10 million ton threshold. Officials estimate the ports generate almost $8 billion in economic development each year.

“We look for synergies in our business. Who’s the next company that we could move next door to the one that we just recruited,” says Cooper. 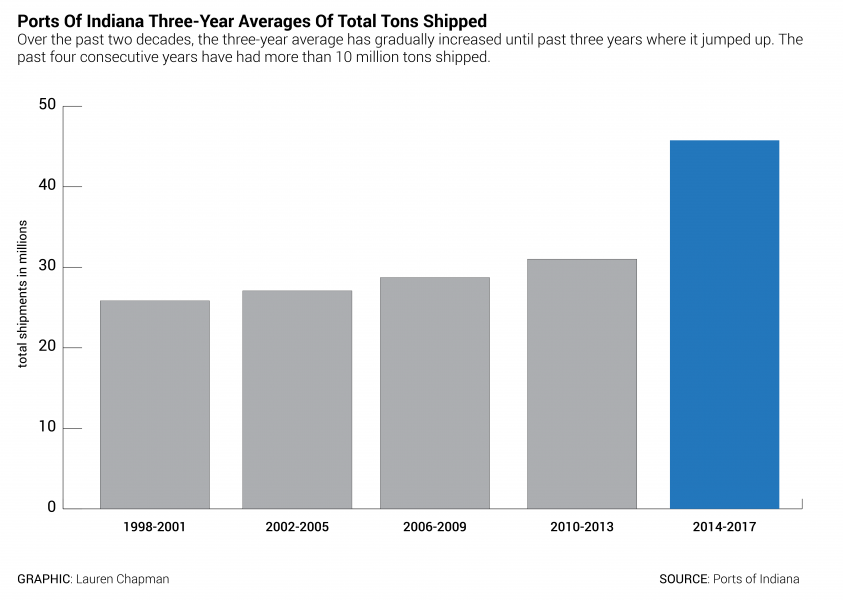 While the numbers have been showing positive results over the past years, the focus is already on how to keep setting unprecedented numbers since the authority’s founding in 1961.

“Everybody wants to see continued growth, and it’s our belief here that if we’re not continuing to grow our business, then we could be in for some setbacks that none of us want,” says Cooper.

While all three ports are reported having had successful 2017’s, Ports of Indiana-Mount Vernon set a historic record in Indiana’s port history, recording 6.8 million tons in shipments.

“In turn, what that could represent is the industry does not have to invest or put capital in to those type of facilities because the port already has them,” says Wilzbacher.

The Burns Harbor port is located on Lake Michigan and both the Mount Vernon and Jeffersonville ports are on the Ohio River.

And to continue growing physically, both the Jeffersonville and Burns Harbor ports will be expanding over the next few years through grants from the U.S. Department of Transportation. The Ports of Indiana is also exploring the possibility of adding a fourth port in southeast Indiana, inside the Cincinnati metropolitan area, after entering an agreement to purchase 750 acres of land along the Ohio River in Lawrenceburg and Aurora, Indiana. Cincinnati is the only major metropolitan area Indiana touches that has no port presence.

“Looking at that possibility, we get excited about could we now replicate what we’ve done at our existing three ports in the far southeastern part of our state,” says Cooper.

However he says this will be done while keeping in mind not causing the syphoning from existing ports.

The interest is there, but Cooper says additional research still needs to be done.

Tags:Ports of Indianashipping
Support independent journalism today. You rely on WFYI to stay informed, and we depend on you to make our work possible. Donate to power our nonprofit reporting today. Give now.

Toyota has not announced the location of the new plant, but it's likely to be near one of the company's U.S. assembly plants in Missouri, Kentucky, Indiana, Alabama or Texas.
Read More