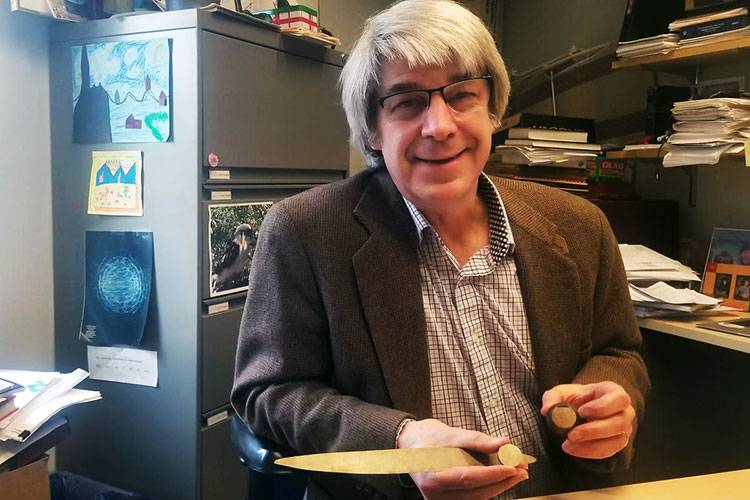 Purdue Center for Metal Casting Research director Kevin Trumble shows some of the sample prototypes of the new alloy he and his team discovered. (Samantha Horton/IPB News)

With valve manufacturers looking for new alternatives to lead plumbing, Purdue University researchers say they discovered a new alloy that could meet the demand.

“Our alloy we found in this special composition, it actually solidifies at a single temperature, just like a pure metal does, that’s kind of an unusual condition,” Trumble says. “So that’s the first thing that we seized on that is the possibility we could have this solidification behavior that would reduce or possibly eliminate the formation of this fine porosity that usually forms.”

He says the new alloy could be used to make lead-free water spigots or water meters.

The use of lead pipes in water systems remains a safety issue across the country. That's why Trumble says  alternative alloys have been developed and studied for a couple of decades.

“The industry itself, so the water casting or water plumbing casting industry, has done a lot of research over the years,” he says. “People that make these castings and they’ve developed some alloys that don’t contain the lead for example. And those efforts have been going on for maybe 20 years now. Well ahead of the regulations that went into place a few years ago across the country.”

The alloy is affordable to create – which is particularly exciting to Trumble.

“You have to have a set of properties that are an improvement and then it has to be lower in cost or not significantly higher in cost to justify the introduction or the adoption of a new alloy so it’s very challenging,” says Trumble.

He says the cost efficiency of the lead-free alloy has already attracted manufacturers.

“When we do an analysis on how much the metal costs, it comes out to be very competitive if not even a little bit cheaper than the current alloys that are used for these kind of applications,” says Trumble.

The next step for Trumble and his team: produce the alloy on a larger scale to further test its properties. He says his team is also looking at other potential uses for the alloy including boat propellers.

Tags:Purdue Universityleadwater
Support independent journalism today. You rely on WFYI to stay informed, and we depend on you to make our work possible. Donate to power our nonprofit reporting today. Give now.