Farmers’ optimism fell for a second month in a row showing rising concerns in farmland rental prices and input costs, such as seed, fertilizer and labor.

During the last 10 years input prices have increased slightly less than 2 percent per year. But the Purdue University Ag Economy Barometer’s June responses show about one-third of producers are worried that input costs will go up more than four times as rapidly in the upcoming year.

Barometer co-author Jim Mintert said the fear about costs, along with slightly lower commodity prices, has led farmers to be more concerned in the short and long term.

"I think people are saying, 'Well, commodity prices are at elevated levels, but we're worried about the cost side,'" said Mintert. "And then combine that with the fact that the prices aren't as strong as they were recently, we're probably a little bit worried about where prices are headed."

Producers that responded to the survey say they are having more difficulty hiring enough labor for their operation this year.

Mintert said the labor shortages are not as drastic in Indiana, but it’s particularly true for specialty crop producers unable to get a sufficient amount of workers.

“Here in the Midwest and in Indiana, in most cases I think what it amounted to was the existing labor force had to step in, fill the gap,” he said. “And they did it by working very long hours, a lot of overtime. And in some cases, some people that maybe planned on stepping out of the operation will end up delaying that for at least a few more months or more, perhaps another year.

The June survey also showed increased interest among farmers in leasing some of their land for solar projects, but the new market holds uncertainty for both farmers and experts.

The survey results found that solar leasing prices still widely vary from less than $500 per acre to more than $1,000 per acre.

Only 3 percent of respondents to the survey said they had signed a solar lease, but that is still more than double the percentage of farmers who have signed contracts for carbon sequestration, a process of capturing and storing carbon dioxide.

Mintert said he recommends farmers wait for the solar market to work itself out.

“This is really early days in the solar leasing arena,” he said. “This market is still kind of searching for an equilibrium with respect to what these rates might be. It's probably gonna take a little while for that to take place.”

The U.S. Department of Agriculture has encouraged farmers to commit some acres to carbon sequestration, but the payments are not as competitive as solar leasing.

The monthly survey conducted by Purdue University researchers records responses from 400 agriculture producers around the country. 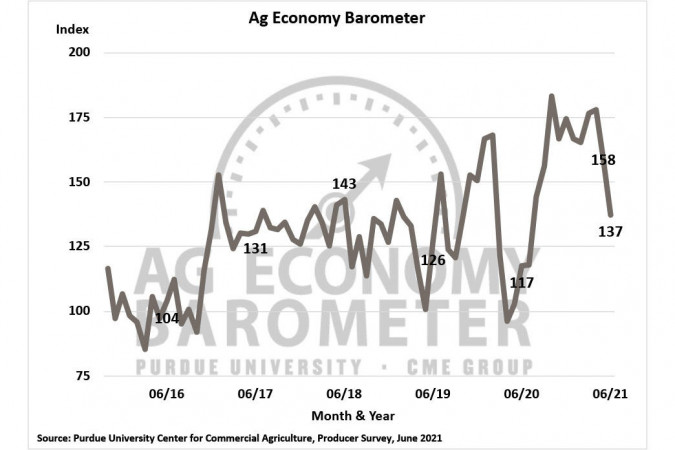 Tags:AgricultureAg Economy BarometerPurdue University
Support independent journalism today. You rely on WFYI to stay informed, and we depend on you to make our work possible. Donate to power our nonprofit reporting today. Give now.