A recent investigative series reported by the Indianapolis Star found that people are dying in Indiana jails at an alarming rate.

About one person dies every two weeks, and Indiana’s suicide rate is higher than the national average. Staffing shortages and a lack of mental health services are to blame, the Star reported, and some family members of those who died while incarcerated are still grappling for answers.

Katrina Pross, WFYI: You and another reporter Tim Evans recently published an investigative series about jail deaths in Indiana. When did you start working on the story and how did it come about?

Ryan Martin, Indianapolis Star: Well, Tim Evans, another investigative reporter at the Star, a longtime reporter, started working on this back in 2017, actually. And I joined him shortly thereafter. But basically what had happened was, we were noticing, we kept getting these press releases and we'd see these little stories here and there across the state about people who were dying inside their county jail. And eventually, we were kind of wondering how big of a problem is this? This just doesn't seem to be something that is affecting, you know, one person here, one person there, it seems to be bigger than that.

Pross: Why did you choose to write about county jails specifically, what sets them apart from state prisons?

Martin: For us, the reason we were so interested in jails specifically is because every community has a jail. And in most counties in Indiana, they're a bit of an institution. But most people inside a jail are considered pre-trial detainees, which means they have not been convicted of any crime. They are being held while awaiting a court hearing, a trial to see a judge. And under our Constitution, under our form of government, they are presumed innocent. People who are in jail are entitled to a certain level of care, and what our reporting shows is that routinely in Indiana, jails fail to meet that standard.

Pross: How does Indiana compare to other states when it comes to jail deaths? Are we above or below the national average?

Martin: One of the things that's really interesting about Indiana's place in all this is the percentage of people who die in jail because of suicide is much higher in Indiana than it is when you compare it to the national average. And one of the reasons that really stood out to us is because what we've found in our reporting is that just about every sheriff we talked to described feeling extremely short staffed, and when you don't have enough staff to monitor and supervise people those who are at greatest risk of suicide, even if a cameras recording, even if someone's supposed to be watching them, they slip through the cracks, so to speak.

Pross: What did you learn from speaking with family members of those who died in jail?

Martin: I think a lot of the people who lost someone in jail, they never really felt heard. I know a lot of them also described how difficult it was to get basic answers to what happened to their loved one in jail. And some people are still kind of fighting to this day to get answers about how someone died.

Pross: Can you tell me a bit about why this is an important topic for people to know about?

Martin: Nobody should die in a county jail. And that's the biggest reason why someone should care about this issue. But you know, I've gotten asked this question by different readers, editors, just people in my life. And at the end of the day, I think everyone needs to ask themselves, if they look at a jail in their community in 2021, and see how that jail is being used, does it really line up with what they expect a jail to do? And do they see it as something that is sustainable, you know, moving forward, or is it something that we need to tackle and improve upon? Because like I said, no jails were designed to handle the challenges that are being thrown at sheriffs today.

Tags:Indianapolis Starjailscriminal justice
Support independent journalism today. You rely on WFYI to stay informed, and we depend on you to make our work possible. Donate to power our nonprofit reporting today. Give now. 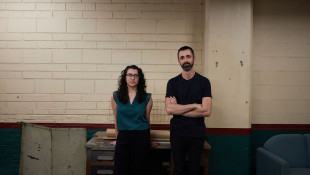 Stories from incarcerated women in Indiana Women’s Prison show instances of lack of crucial medical care and sexual assault. That's what a new season from Sick podcast found after a year-long investigation.