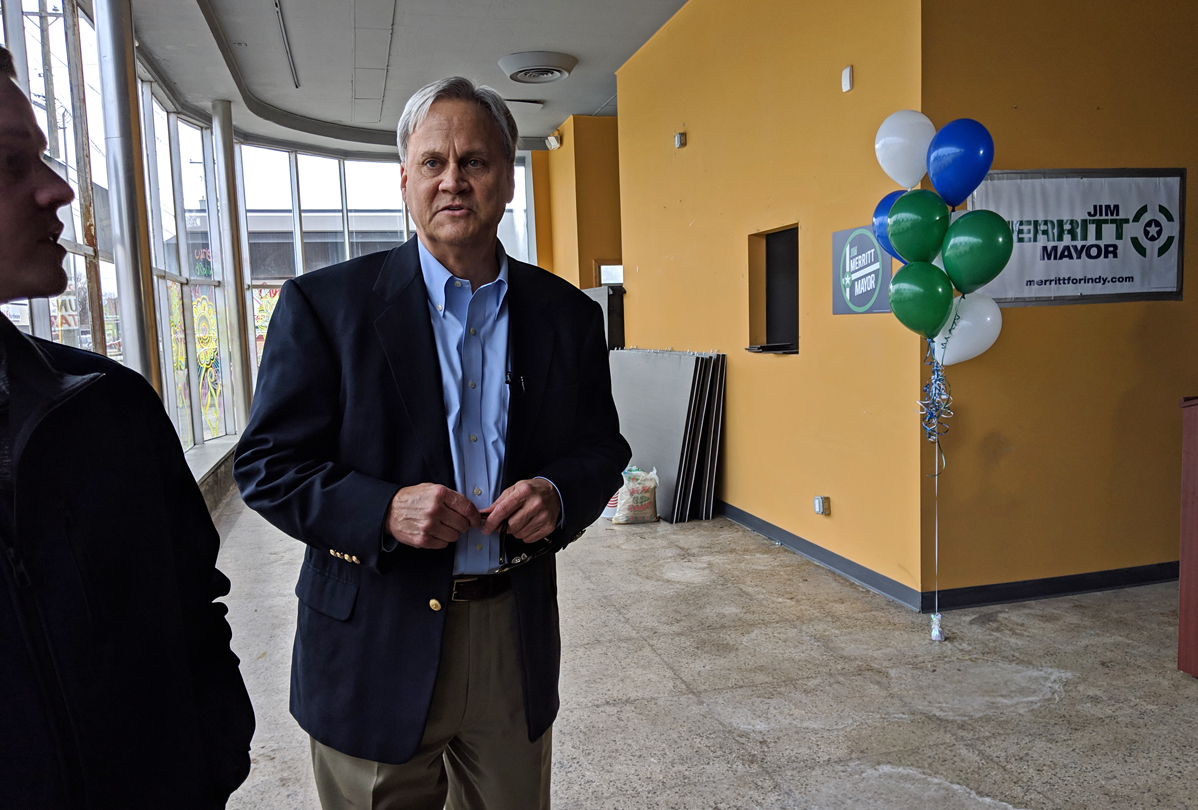 Sen. Jim Merritt says Indianapolis' current administration, led by Democratic Mayor Joe Hogsett, has failed to come up with long-term solutions to many of the city’s problems. "They patch," he says of his opponents. (Drew Daudelin/WFYI)


In an old, abandoned car dealership north of downtown Indianapolis on Thursday, Jim Merritt confirmed what many have expected for months. The state senator will seek the Republican Party’s nomination in the mayoral race.

Merritt says too many community programs are uncoordinated, and too many groups are chasing the same sources of funding.

"We need to get back to conflict resolution in the grassroots," Merritt says.

He says the current administration, led by Democratic Mayor Joe Hogsett, has failed to come up with long-term solutions to many of the city’s problems. "They patch," he says of his opponents.

And like Hogsett, Merritt is making crime a key talking point of his campaign.

“My mom doesn’t drive anymore. But if my mom was going to the grocery, I’d be worried about her getting out of her car and getting into the store. People feel unsafe,” Merritt says.

There were a record number of criminal homicides in Indianapolis last year, but the city says overall violent crime is down.

Merritt says the high rate of unsolved crimes has to be addressed, and that "low morale" at the Indianapolis Metropolitan Police Department is making things worse.

That low morale, he says, will be gone when he is in office.

Merritt also focused on what he calls "rampant homelessness," an issue that attracted increased attention in 2018, in part because of complaints about aggressive panhandling in the city's downtown core. He says more support is needed for temporary help, like shelters, and for substance abuse treatment.

"We need a detox treatment recovery system of care in this state," Merritt says. "And right now we're getting there. We're not there yet. But it takes expertise. Just like any other industry we need labor, we need a workforce, we need hospitals, we need everybody, we need insurance companies, and I will continue to work on it."

Merritt says more details about his solution to that problem, and others, will be revealed in the coming months.

"This November, Indianapolis voters will have the opportunity to make their voices heard," the statement says. "Should Senator Merritt win his party’s nomination, I look forward to a spirited conversation."

The mayoral election will happen in November.

Tags:Jim MerrittIndianapolismayorJoe Hogsettelection
Support independent journalism today. You rely on WFYI to stay informed, and we depend on you to make our work possible. Donate to power our nonprofit reporting today. Give now.