A Purdue University space debris expert says Russia’s test of an anti-satellite missile Monday will likely create a decade’s worth of dangerous debris.

The U.S. State Department and NASA officials have condemned the Russian missile test for creating a cloud of thousands of debris pieces that now orbit the planet, potentially endangering the International Space Station and other satellites.

“Everybody, not only the ISS, now has to deal with it and avoid the bigger pieces and trying to weather the small ones,” said Dr. Caroline Frueh, an associate professor of Aeronautics and Astronautics at Purdue. “On the other hand if a small one hits your satellite battery you become debris yourself, very suddenly.”

Even tiny pieces of space debris can pose a huge problem. Frueh said the debris is moving at speeds of up to 10,000-15,000 miles per hour.

“That’s faster than when you shoot a gun,” Freuh said. “That’s what’s making it so dangerous.”

The crew of the ISS reportedly took shelter for the first two hours following the missile test. NASA officials said the station passes by the debris cloud every 90 minutes.

Frueh, who has contributed to databases monitoring leftover space junk, said that space debris is a growing problem. She said given that some space debris can take thousands of years to finally fall back to earth, it’s important to reduce how much is getting left in orbit.

“If we’re clogging it up more and more, the effects of collisions are much more severe because the pieces can hit a lot more satellites,” she said. “Anti-satellite tests are especially annoying because that’s creating space debris at leisure.”

Frueh said an object's altitude in orbit will determine how long it takes to fall back to earth. 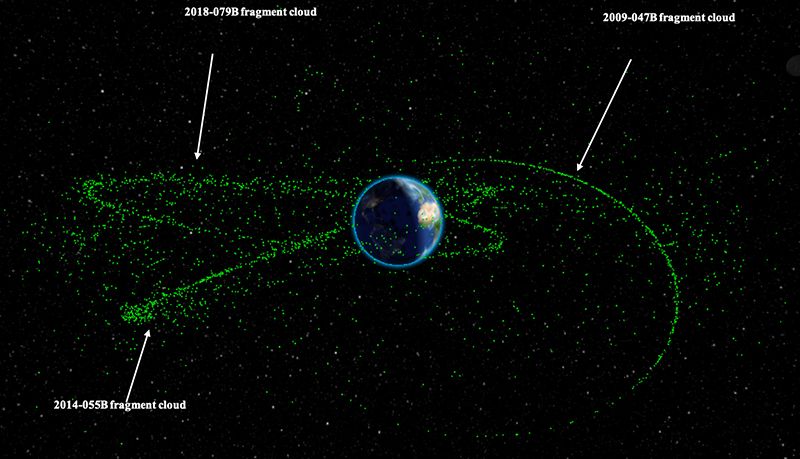 In the case of the Russian missile test, debris was created at roughly the same altitude as the ISS -- 420 kilometers -- and will take roughly a decade to fall back to earth. (The ISS is kept in orbit by being periodically boosted back up).

And, according to Frueh, there is a real danger of a cascading effect - as more satellites are put into orbit there might be more collisions, creating even more debris. In 1978, NASA scientist Donald Kessler warned of a doomsday scenario (the so-called Kessler Syndrome) in which a cascade of colliding debris could make space travel and satellite use at certain altitudes impossible for generations.

But Frueh said she doesn’t think that scenario is particularly likely, and pointed to a more immediate problem: as more debris has accumulated in orbit, the cost of shielding satellites has increased.

“I think before we are hitting the end of the line, no more spacefaring, we are actually hitting an economic problem,” she said. “Kessler Syndrome is one thing, but the problem is a lot more complex.”

For Frueh, the solution to the growing issue of space junk is largely about managing how much debris gets left in orbit moving forward.

“There are a few active [debris] removal missions, but that’s only a handful of pieces,” she said. “For the vast majority we want to be especially careful -- what decisions are we making now? We want to do mitigation measures, we want to get the lower satellites down within the 25 years after their use, ideally faster. We don’t want to create any mission-related objects if we can avoid it.”

Tags:NASAPurdue University
Support independent journalism today. You rely on WFYI to stay informed, and we depend on you to make our work possible. Donate to power our nonprofit reporting today. Give now.