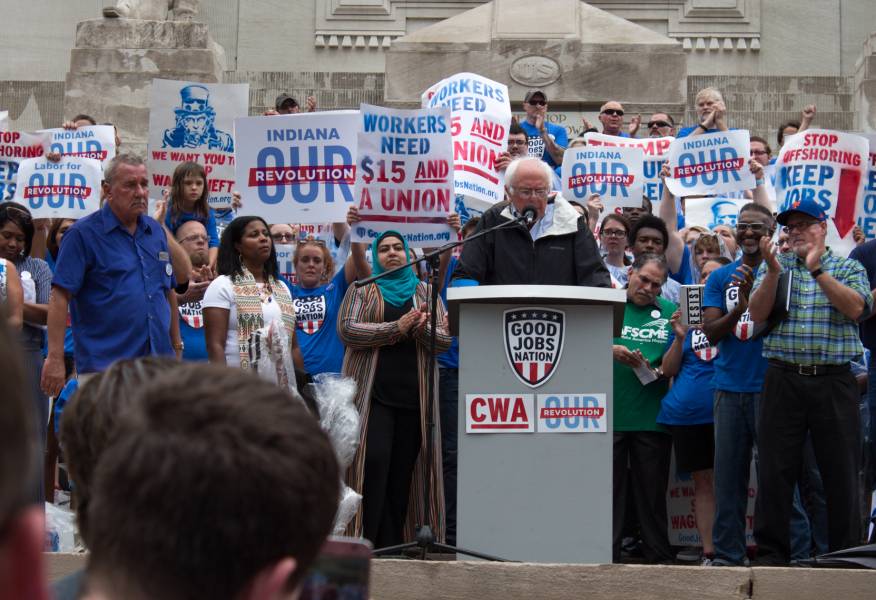 Sanders' speech hit many of the same topics he focused on during the 2016 election – tuition-free college, universal healthcare, and higher taxes for the wealthy. (Photo by Drew Daudelin)

Sanders' speech hit many of the same topics he focused on during the 2016 election – tuition-free college, universal healthcare and higher taxes for the wealthy.

But the primary message was an attack on President Donald Trump, for what Sanders says is a failure to act on campaign promises to prevent jobs from leaving the country.

“Donald Trump told the workers of Indiana, and Vermont, and all across this country he was gonna stand with them. And then he gave us a budget, which was one of the most ugly and unfair budgets in the history of this country,” Sanders said.

With Sanders was former president of United Steelworkers Local 1999 Chuck Jones, who has his own history with Trump. The union represents workers at the Carrier manufacturing plant that came to symbolize outsourcing controversies last year.

Hundreds of Carrier jobs in Indianapolis, scheduled to leave for cheaper labor in Monterrey, Mexico, were saved through a deal stimulated by Trump. But hundreds more are still being sent out of the country.

Jones says Trump promised workers at Carrier that none of their jobs would leave.

"It's time [for Trump] to stand up and say that he's gonna do it," Jones said, "or that he was bullshitting the American people."

Jones ended his speech with a line that prompted cheers from the crowd – that he hopes to see Sanders on the 2020 presidential ticket.

Tags:jobsBernie SandersDonald TrumpCarrier Corp.Chuck Jonesrally
Support independent journalism today. You rely on WFYI to stay informed, and we depend on you to make our work possible. Donate to power our nonprofit reporting today. Give now.