Republicans in Congress approved a sweeping and controversial $1.5 trillion tax overhaul, with the Senate voting early Wednesday along straight party lines to move the measure forward.

As NPR reports, the measure will have to return to the House for another vote because of a parliamentarian rule snag.

Here’s how Indiana’s Senators voted for the measure and what they said in response. See how Indiana’s House delegation voted and their statements here.

President Trump and Vice President Mike Pence, formerly Indiana’s Governor, put significant pressure on Donnelly to support the tax measure. In the end, the bill passed without support from any Democrats.

In a statement, Donnelly says he agreed with the president’s goals of reforming the tax code, but says this bill does not reflect those priorities.

Speaking on the Senate floor on Tuesday, Donnelly outlined his reasons for opposing the proposal:

“Instead of providing a tax cut that overwhelmingly benefits the middle class, this bill cuts taxes for the wealthiest Americans while raising taxes on a majority of families making less than $75,000 in the coming years,” he said.

Young has long supported the tax overhaul. In a video statement, Young praised the bill’s measures, including the repeal of the Affordable Care Act individual mandate.

“This bill’s going to create a tax code that is simple, fair, and that allows Hoosiers to keep more of their hard-earned money,” Young said. “Throughout this process, I listened carefully to feedback from people across the state of Indiana. I’m glad to say this bill continues and expands support for a number of Hoosier priorities.”

Tags:Todd YoungU.S. SenateJoe Donnellytax reform
Support independent journalism today. You rely on WFYI to stay informed, and we depend on you to make our work possible. Donate to power our nonprofit reporting today. Give now.

The U.S. Supreme Court has declined to hear the appeal of a man sentenced to 60 years in prison for his role in a shooting that killed a northern Indiana boy who was playing outside.
Read More 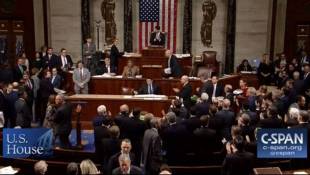 Among Indiana's House delegation, the vote split evenly along part lines: the two Democrats voted no while all seven Republicans voted in favor.