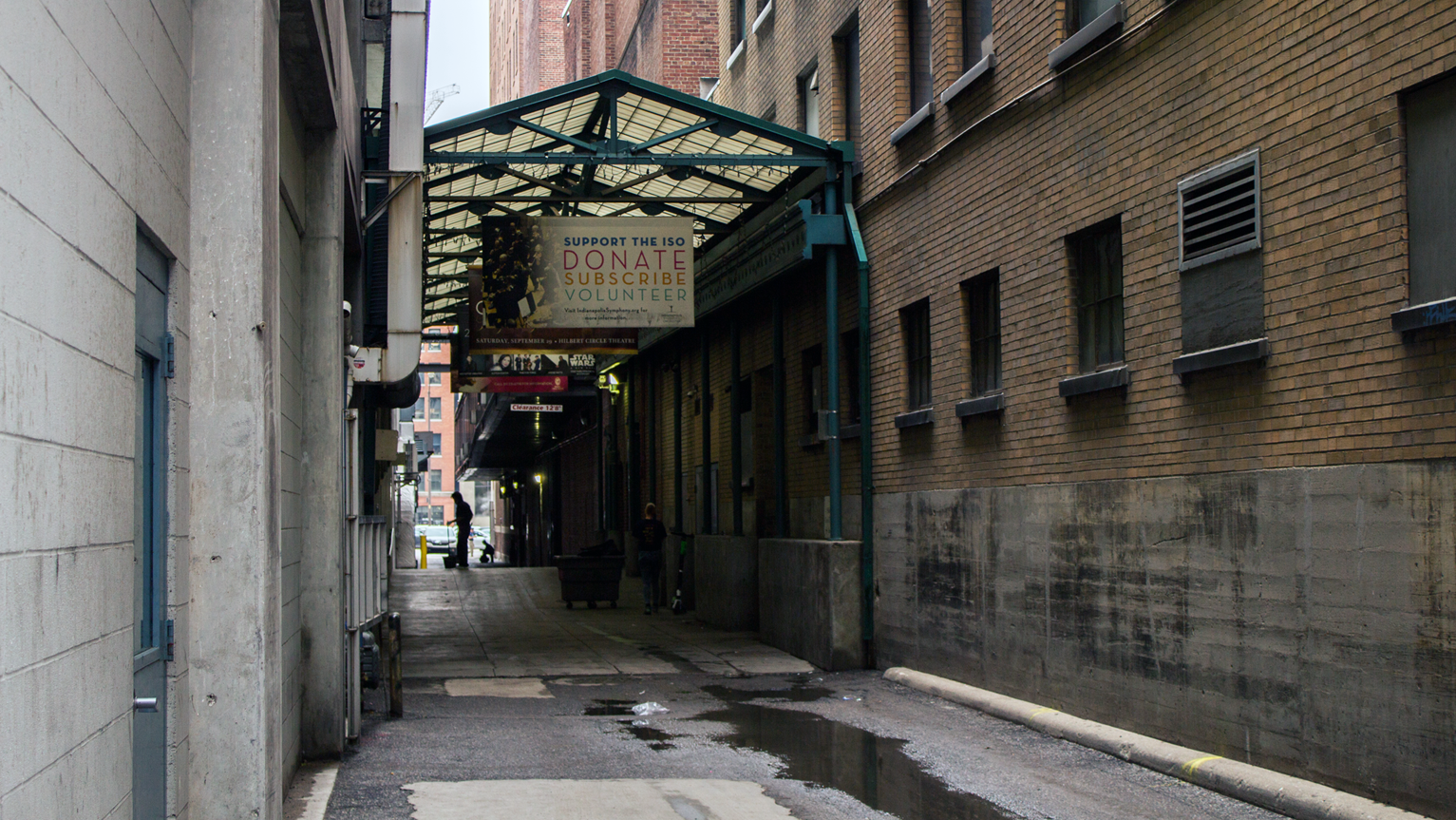 Downtown Comics co-owner Doug Stephenson says this alleyway, located next to his building, attracts crime. He says drug dealers have corrupted the area's homeless population and deterred customers from his shop and others. (Photo by Drew Daudelin/WFYI)


The homeless population in downtown Indianapolis got a lot of attention this year. Some say their presence makes the area feel unsafe. Others reserve blame for so-called “professional panhandlers.”

A controversial new ordinance under consideration by the City-County Council would impact both groups. And it's uncovered deep-seated disagreements about how to handle the complicated issue.

Smiley is frustrated by the rising popularity of a drug called Spice – a kind of synthetic marijuana sprayed with mind-altering chemicals.

“I mean we can’t just walk up and stop somebody…”

Smiley is distracted by a man walking by. He nods in his direction.

“Like this gentleman, I know, is a spice dealer, and user," Smiley says. "But I can’t just walk up and stop him for no reason, you know? And they’re pretty good at hiding it. It’s like a shell game.”

Smiley says the homeless population, also drawn to the area, has become a source of profit for Spice dealers. And it's taken a toll on an already vulnerable group.

“You see them walking around like zombies and that’s what it is, it’s the Spice," Smiley says. "They’re just … it’s out of control. And it’s so easy to get, and it’s so cheap.”

It’s early afternoon on the Circle. A lot of people are on their lunch break, and a lot of business owners want their attention.

One of them is Doug Stephenson, co-owner of Downtown Comics.

“We need people to walk by our stores, our storefronts, look in the window, come in, you know, that’s why we prop our doors open down here,” Stephenson says.

Stephenson says Spice dealers, and the homeless population affected by the drug, started hurting businesses on the Circle about six months ago. An alleyway next to his shop attracts crime, and he says too many people would rather play it safe, and walk on the other side of the street.

Stephenson says it got so bad that he started handling situations himself. He found himself going outside during drug deals in the middle of the day, staring dealers down and letting them know he sees them.

“We were trying to basically police the streets down here, right in front of our store, you know, in a limited area," Stephenson says. "And that’s not what we signed up to do 20 years ago. I didn’t open a business to chase off petty drug dealers.” 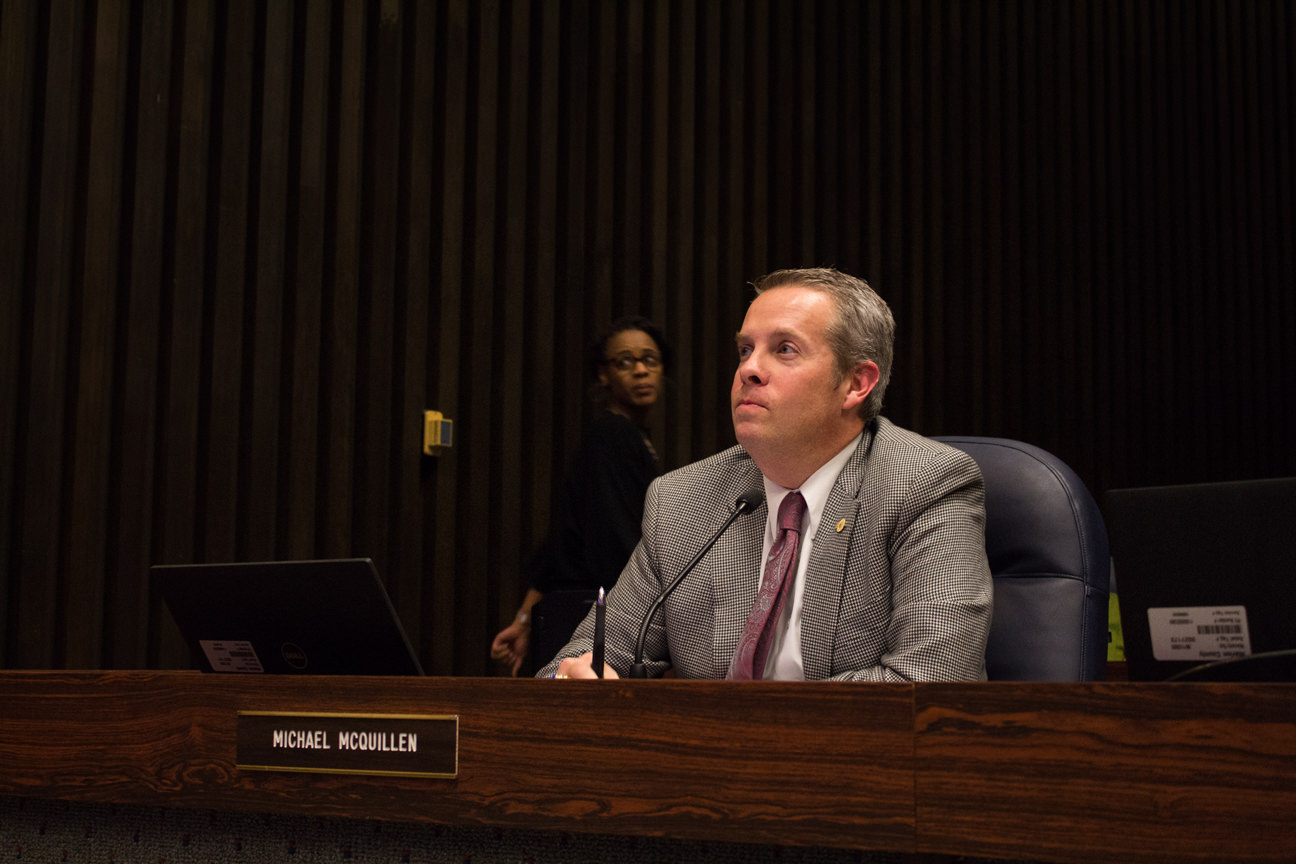 Republican City-County Councillor Michael McQuillen says he's been involved with many attempts to address concerns with panhandlers and the homeless population, and run into "constitutional issues." (Photo by Drew Daudelin/WFYI)


Stephenson wasn’t the only one having problems.

Michael McQuillen leads the Republican minority in the City-County Council and says he saw a jump in complaints via phone calls and emails this year – not specifically about Spice, but about the more broad, easily visible element: the increased number of homeless people and panhandlers on the Circle.

“We’ve actually, over the last many years, looked at many different possibilities of how to handle the folks on the streets. And we’ve run into constitutional issues,” McQuillen says.

The ordinance states that no one in the Mile Square – the area around Monument Circle – can sit or lie down on a public pathway between 6 a.m. and midnight.

“Those folks who are on the streets, whether they’re our homeless neighbors or panhandlers, we don’t want them there," McQuillen says. "We want the panhandlers to go away, we want the homeless folks to get into shelters and places where they can get help.”

The ordinance lists 10 situations in which the rules don’t apply. They include sitting or lying down due to a medical emergency, waiting in line for goods or services, and participating in events like parades, festivals and rallies.

That list could change as the ordinance moves through the City-County Council. McQuillen expects it will expand, and says he hopes to keep it "fair, legal, and compassionate" in the process.

Just two hours after McQuillen announced his proposal, a statement opposing the ordinance came from the Coalition for Homelessness Intervention and Prevention, the homeless advocacy group known as CHIP.

"This ordinance will increase trauma and increase barriers,” says Caleb Sutton, who was CHIP's interim executive director at the time.

The first draft of the ordinance, introduced to the City-County Council on Sept. 24.


In its statement CHIP also said Indianapolis doesn’t have the capacity to house more people, especially during daytime hours. The city’s primary shelter, Wheeler Mission, routinely hits their limit during the winter months, and has 10-day-a-month restrictions on people who are chronically homeless.

McQuillen says the city will work with churches to make new shelter space, if needed. And as it’s written now, the ordinance exempts people from a citation if there’s no shelter space available.

But a significant driving force behind support for the ordinance is an attitude towards people who typically won't be sent to shelters – panhandlers.

“Panhandlers I don’t really have any sympathy for," McQuillen says. "A lot of them you see moving from place to place, and they’re not truly homeless. A lot of them are con-people, as far as I’m concerned. And those people need to be moved along.”

Back on Monument Circle, Officer Smiley says panhandlers often live in hotels. Many of them use disability checks to pay their nightly fee, beg for money so they can get food, and sometimes use drugs and alcohol to self-medicate their mental health issues. And he says they still need help.

“I mean, we think they’re in a hotel so they’re not homeless, but…who wants to live in a hotel, right? There are some bad elements, but as a whole the group is not criminal, they don’t intend harm on people,” Smiley says.

Stephenson, at Downtown Comics, is not a fan of the sit-lie ordinance.

“It’s not the panhandling, it’s not the homeless laying around, we’ve had that for the whole 25 years I’ve been here, and that’s not … not anything new," Stephenson says. "It’s not a legislative thing, it’s a law enforcement kind of thing, it absolutely is that."

It will likely be a challenge for McQuillen to get approval for the ordinance from the City-County Council’s Democratic majority. And a number of groups with a stake in the issue – Wheeler Mission, Downtown Indy Inc., Visit Indy – acknowledge the problem but won’t take an official stance on McQuillen's solution.

McQuillen says his intent was to take baby steps beginning with the Mile Square, and eventually pass a city-wide ordinance.

“I don’t see this as a 'cleanup and hide our problem,' I think it’s a direct-on approach to try to reach out to folks who have problems,” McQuillen says. "It’s not an easy answer, and I think that’s why Indianapolis hasn’t taken this question on as openly, until now, as we have."

McQuillen says even if his ordinance goes nowhere, he’s glad he kicked off a conversation that might lead somewhere else.

Tags:homelessnesspanhandlingsit lie ordinanceIndianapolis City-County CouncilMonument CircleMile Square
Support independent journalism today. You rely on WFYI to stay informed, and we depend on you to make our work possible. Donate to power our nonprofit reporting today. Give now.