KOKOMO -- Funeral arrangements for Deputy Carl Koontz have been finalized.

Students at Northwestern Elementary in Howard County, where Koontz was a school resource officer said Monday that they prayed for him.

Koontz was shot and killed while serving a warrant early Sunday morning.

The suspect is 25-year-old Evan Dorsey. Investigators say Dorsey, shot Koontz and his partner Sgt. Jordan J. Buckley, then turned the gun on himself and died.

Monday afternoon Koontz’s body was taken from Indianapolis back to Howard County and hundreds lined the highway to pay respects.

Sgt. Buckley was released from IU Health Methodist Hospital Monday afternoon and was in a police vehicle riding in the procession for Deputy Koontz.

Koontz leaves behind a wife and an 8-month-old son.

Gov. Mike Pence has ordered flags to fly at half-staff in memory of Deputy Koontz.

Tags:Howard CountyKokomoCarl KoontzHoward County Sheriff's Department
Support independent journalism today. You rely on WFYI to stay informed, and we depend on you to make our work possible. Donate to power our nonprofit reporting today. Give now. 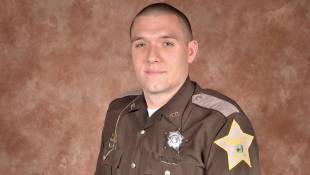 A Howard County sheriff's deputy was fatally shot and a second wounded during a shootout that left the suspect dead as they executed a warrant in the early morning hours of Sunday.