One hot afternoon in June, in the parking lot of a dollar store in the near east side of Indianapolis, Kelly Davila sets a timer on her phone. It takes two minutes to walk from the Family Dollar store to a gas station convenience store - both places sell cigarettes.

It takes another six minutes to walk from the gas station convenience store to the next licensed tobacco retailer, a bar. Two minutes later there’s another gas station.

Davila is literally walking me through her research. She coauthored a new report with the Polis Center at Indiana University - Purdue University Indianapolis, which finds that where there are dense clusters of tobacco retailers, there’s a higher rate of smoking.

While the smoking rate has declined overall in the United States, national data show it remains high among the poor. The Polis Center’s research found that in some low-income Indianapolis neighborhoods, the smoking rate is 29.4 percent, nearly twice the national average, and significantly higher than Indiana’s 20 percent rate.

“So we can see that there is a link between these two things: between smoking and access to retailers,” Davila says.

The report refers to these areas, where retailers are in close walking distance as “high-access” areas.

For instance, nearly 40 percent of near east side residents live below the poverty line, compared with 10 percent in areas where tobacco is the least prevalent. And maternal smoking rates are twice as high where there’s a concentration of tobacco retailers. The percentage of households without a vehicle is four times higher, and there are three times more adults without a high school diploma. 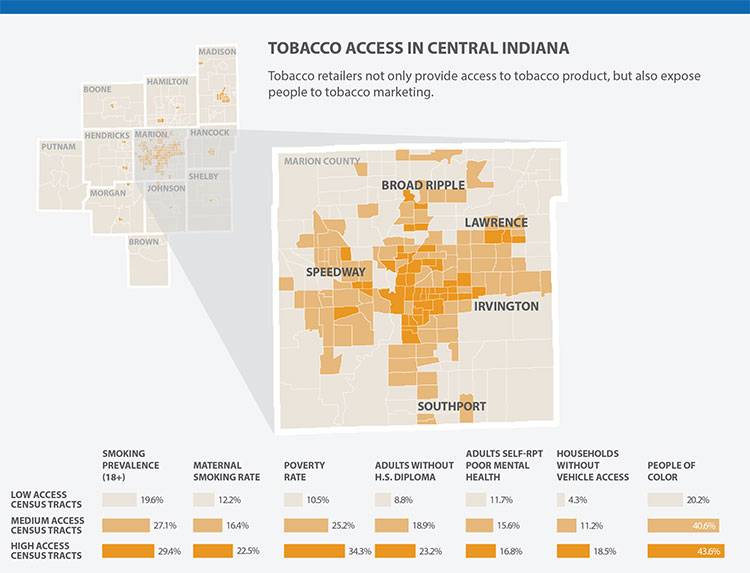 Walking up Tenth Street past tobacco retailers, it seems like common sense that high tobacco density would equate to higher smoking rates. And national research supports this. Living in an environment saturated with stores that sell cigarettes makes it harder to quit.

But that means yet another disparity between the potential health outcomes of people living in poor versus affluent neighborhoods, explains Joseph Lee, an assistant professor of health promotion at East Carolina University has studied the relationship between neighborhood characteristics and tobacco density nationally. 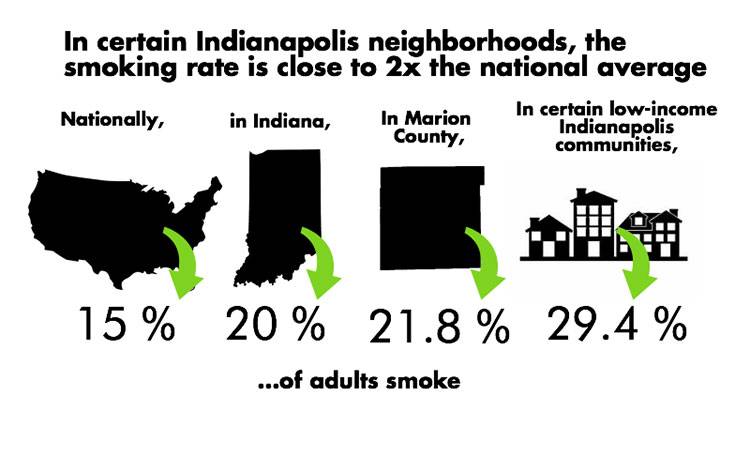 “In one community your kid is going to be exposed to a certain amount of tobacco advertising and sale of cigarettes and in a different ZIP code a child would be exposed to a much different level of all of that,” he says.

And this disparity means it’s much easier to start smoking young in neighborhoods where there are more corner stores with more marketing materials.

But how did these neighborhoods end up this way? Lee says there are two things going on.

One is store density, and the other is the amount of marketing dollars tobacco companies spend to target these neighborhoods. Lee found that some communities are flooded with advertisements.

So, the marketing materials are concentrated too. He says thousands of publicly available documents from court cases involving tobacco companies reveal that the industry profiles communities.

But the retail store landscape, predates those marketing strategies.

“So if you think about going back to bank redlining when it was harder to get loans in neighborhoods with more African American residents,” Lee says, “then there would have been fewer resources in those communities.”

That means you end up with a lot of really small family owned convenience stores - that don't have a whole lot of products, but they do have a lot of tobacco marketing.

There’s another tool the tobacco industry uses to keep its customers in targeted communities: coupons. In 2014, the industry spent almost two thirds of its $5 billion dollar marketing budget on discounting tobacco products. In other states, like Rhode Island, local government managed to ban tobacco discounts. But Indiana passed a law in 1997 that restricts localities from regulating tobacco retail sales and marketing.

At the intersection of 10th street and Parker there’s a cluster of stores that sell tobacco, two liquor stores and another gas station, only two minutes away from the last retailer. During our 15-minute walk, on less than a mile of road, we found seven place to buy cigarettes.

And we met a smoker, a man named Phil, who struck up a conversation about his buying habits.

“Maybe one day I’ll quit just cold turkey again, you know start exercising like I used to. Get in the gym,” he said.

Phil buys a pack of Newports at the Speedway or the Marathon whenever he’s out. And when he can, he uses the coupons he gets in the mail: $2 off two packs.

Tags:smokingPolis Centertobacco access
Support independent journalism today. You rely on WFYI to stay informed, and we depend on you to make our work possible. Donate to power our nonprofit reporting today. Give now.