About 20 or so women were gathered for a late afternoon video conference. Some had glasses of wine, or cups of coffee. You could see pets in a few frames. It was March 26, when COVID-19 cases were beginning to ramp up in Indiana.

One of the women, Dr. Theresa Rohr-Kirchgraber, posed a question: Was anyone else feeling guilty?

“I kind of figured that if I was feeling that way, I'm sure a couple of others were,” Rohr-Kirchgraber recalls. “Maybe giving voice to it would help me address it in some way and help to take away a little bit of the pain.”

The Zoom session was a wellness meeting for women faculty at the Indiana University School of Medicine. Since the start of the pandemic, the group has gathered virtually to check in and provide emotional support.

Rohr-Kirchgraber's feelings of guilt resonated with another woman in the meeting, Dr. Cindy Brown.

“I was really, for several weeks, having a lot of trouble sleeping,” Brown says.

Doctors have high rates of burnout, depression and suicide. But there’s a less-understood emotion doctors also struggle with: guilt.

Brown treats patients with cystic fibrosis, a genetic disorder that affects the lungs. Rohr-Kirchgraber works with adolescents with eating disorders. Both provide virtual care, but neither work with COVID-19 patients on what’s being called the front lines of the pandemic.

And that makes them feel guilty. Rohr-Kirchgraber knows her work is important, but she sometimes feels like a fraud.

“You're getting a lot of comments from friends and neighbors, ‘Oh, good for you, take care, front lines,’” she says. “And I have to kind of go, ‘Uh, thanks.’”

Brown has had similar experiences. After a day at the office seeing patients virtually, she stopped for gas, still wearing her scrubs. Someone thanked her for being a hero.

Guilt is a common feeling among physicians, but it’s not well studied, says Dr. Lawrence Blum, a Philadelphia-based psychiatrist and psychoanalyst who has written about doctors' guilt and treated them for years.

“What they're describing is, I think, not unusual for doctors,” Blum says. “The felt need to do more than you're already doing, or that what you're doing somehow isn't enough. It's almost like a pre-existing condition that now is exacerbated by the current situation with the COVID-19 pandemic.”

In his practice, Blum found guilt causes doctors to hold themselves to unrealistic standards they can’t meet while treating COVID-19, a disease they’ve never experienced.

The guilt is more complex for doctors who don’t see COVID-19 patients. Dr. Katherine Gold, who works in family medicine and researches physician mental health at the University of Michigan, compares it to the survivor’s guilt someone might feel after a natural disaster.

“One of the most important components is that you feel very connected to the other people,” she says. “So maybe there's a tornado that hits in your neighborhood … so you think, ‘Oh, it could have been me.’”

Tags:coronavirusCOVID-19doctorsmental health
Support independent journalism today. You rely on WFYI to stay informed, and we depend on you to make our work possible. Donate to power our nonprofit reporting today. Give now. 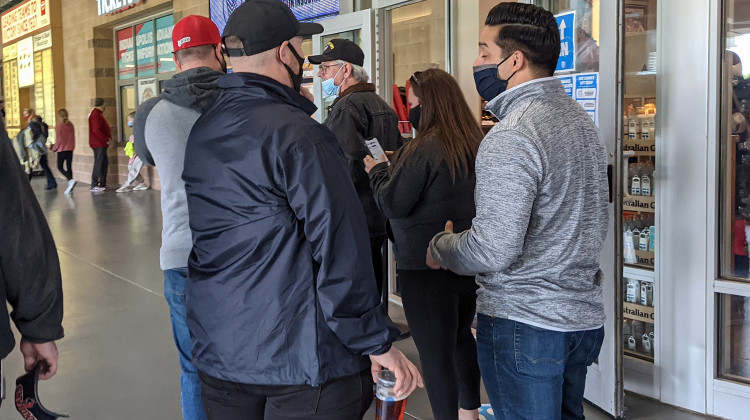