The fate of Gary’s Thea Bowman Leadership Academy is in flux after the Indiana Charter School Board voted down its change of sponsor request Tuesday.

It’s the latest development for the 1,300-student school as it faces possible closure this summer after Ball State University said in January it would not renew the charter for the two school, K-12 system because of ongoing failures by the school's governing board.

Thea Bowman leaders had hope a total restructure of its board, announced Tuesday, coupled with a partnership with Indianapolis-based Phalen Leadership Academy to manage the schools would be meet by support and a new charter.

But at the end of the two-hour hearing, ICSB members voted 5-2 to deny the request for one of the state's oldest charter schools, citing concerns over the new governing board’s capacity to oversee the schools.

“The standard I have is not to give folks a chance. I think it has to be: are all parts of the plan solid, so that we have great confidence that this will be an awesome experience for kids and families,” ICSB board chairman Karega Rausch said after the vote. “In my estimation, some of the challenges in governance didn’t meet that criteria.”

The denial now creates an opening for school leaders to patch things up with its current sponsor Ball State or for a parent-led organization to take reins of the school with the help of another Gary charter operator.

Even Rausch referenced the possibility of the school remaining open under Ball State before the board voted to reject the application. ("If you believe some media reports, that could be viable," he said.)

Nonetheless, the no vote stunned Thea Bowman supporters at the Indiana Government Center South including a student who began to sob.

“It would have been nice to have a fair assessment,” he said. “I am not sure if individuals read the application.”

Phalen responded that the ICSB granted him ten charters a few years ago when most of his experience was from running summer education programs.

“That did not seem like an authentic comment. It’s politics to me.” Phalen said. “Could our presentation been better about what we are going to do with the board? Yeah, it could have been better. But that was all in the documentation.”

Phalen said the new board is planning a retreat and will continue bolstering its plans to oversee the schools.

In February, Thea Bowman’s former leadership said it would not appeal Ball State’s nonrenewal, but instead seek a new charter from the state authorizing board -- a bid that was the first of its kind since laws were enacted in 2013 and last year to prevent troubled charter schools from switching sponsors to escape accountability.

The plan raised eyebrows as it appeared to some, to be a case of the controversial practice known as “authorizer shopping.”

Yet Indiana Charter School Board staff found Thea Bowman’s request as an attempt to restart the schools with new oversight. The staff recommended the charter to be approved by the board.

Ball State granted Thea Bowman a charter in 2003 -- one of the first in the state. But since last year, the university had called on the its board members to resign after the school was placed on a one-year provisional charter for governance problems, including disregard to Open Door law and micromanaging the schools.

Back To Ball State?

Robert Marra, Ball State’s charter school office executive director, told WFYI earlier this month that he does not want to close Thea Bowman but rather see a new board installed.

Marra has said he would consider granting a provisional charter to a group of Thea Bowman parents that would partner with Lighthouse Academies, a charter school network authorized by the university, to manage the school.

But after the ICSB's denial, Thea Bowman’s new board wants to approach Ball State to appeal its nonrenewal decision.

Marra could not immediately be reached for comment Tuesday.

On Monday the seven members of the Drexel Foundation for Educational Excellence Inc., the body that holds Thea Bowman’s charter and oversees the schools, resigned and four new members approved.

Drexel Foundation’s new members include attorney Tony Walker, a former Indiana State Board of Education member, and community advocate Eve Gomez. A fifth board member, who would focus on financial issues, has yet to be chosen.

In 2010 the two-school network was rated a C, in the past three year's its been graded a D on the state’s A-F accountability scale. Thea Bowman leaders maintain that the high school received an individual score of a C for 2015, though the Indiana Department of Education's Compass site only lists a single grade for the elementary and high schools -- D.

If the Indiana Charter School Board approved the new charter, they then would have been required to defend the decision to the Indiana State Board of Education for final approval -- part of a still untested 2013 law.

The AP reports: Thea Bowman charter school has been spared after it was set to close next month because Ball State University declined to reauthorize its charter.

The State Board of Education must approve Trine as the new authorizer for the school to remain open. The board will vote on the issue June 1.

Tags:Phalen Leadership AcademyThea Bowman Leadership AcademyIndiana Charter School Board
Support independent journalism today. You rely on WFYI to stay informed, and we depend on you to make our work possible. Donate to power our nonprofit reporting today. Give now. 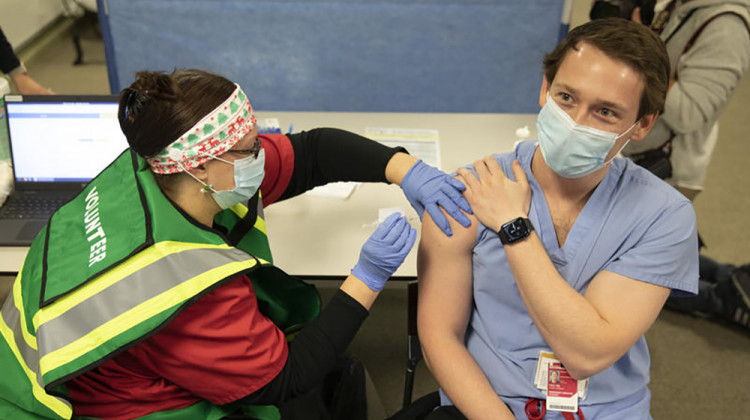