IPS Against Recommendation To Make 2 Takeover Schools Into Charters

But leaders at Indianapolis Public Schools disagree and are asking the State Board of Education to delay a vote on the recommendations for Emmerich Manual and Thomas Carr Howe high schools set for Wednesday because of financial concerns.

“IPS is represented on the transition task force and ultimately chose not to support the recommendation based on several uncertainties related to the debt financing of the school buildings,” the district said in a statement.

The IPS Board of School Commissioners is requesting a one-month delay of the Indiana State Board of Education vote.

At issue is how the district could be impacted financially it Howe and Manual become charter schools in 2020.

Law allows the buildings, following the end of state intervention, to be turned over to a charter organizer in a sale for $1.

IPS is worried it could be left to shoulder debt on the buildings. Howe high school had nearly $30 million in unpaid bond obligations in mid-2017, according to documents obtained in a public records request.

The state board created the task force to assess the future for Manual and Howe high schools. The two were taken over by the board in 2011 after years of chronic academic failure. A year later, the Florida-based Charter Schools USA, also known as CSUSA, began running the schools on state contracts.

Manual High Schools’s accountability grade is a C, on the state’s A-F scale, and Howe’s remains an F.

Read More: Can This Principal Save Indiana’s Longest Failing School?

The contracts end in mid-2020. State law requires the State Board of Education to chose one of three options for each school -- close the school or merge it with another higher-performing school; ask CSUSA to seek a charter with one of the state’s authorizers to keep control of the school; or return the school to the home district, IPS.

Consultant Charlie Schlegel, who leads the task force, held five community meetings at and near the schools attended by more than 500 people.

Sixty-percent of people -- attending the meetings and giving input via an online survey -- said the best option was for CSUSA to seek charters for the schools.

“The second choice among the folks was -- they just weren’t sure or didn’t have an opinion,” Schlegel says. “From that vantage point, the community who spoke out had a pretty clear point of view.”

If the board approves the recommendation, a non-profit organization connected to CSUSA is expected to seek a charter through the Indiana Charter Schools Board to oversee the schools.

The task force -- which included IPS and CSUSA staff, school staff and community members -- voted 4-2 to recommend CSUSA seek charters for the two schools. Jamie VanDeWalle, IPS portfolio officer, was one of the no votes.

Throughout this process, CSUSA staff have sought to operate the Howe and Manual as charter schools at the end of the state intervention.

“A member of CSUSA Indiana state team was a member of the school transition task force and contributed to the work and recommendation,” Eric Lewis, director of CSUSA’s Indiana schools, said in a statement. “We have expressed our support of the recommendation and await the decision of the state board at the March 6 board meeting.”

The vote on the task force recommendation is expected to remain on the State Board of Education’s agenda for the Wednesday meeting, according to a board spokesperson.

The state takeover of the two schools was fraught was bitter politics and fighting among the former leaders at IPS and the Indiana Department of Education. More than 1,000 students fled Manual and Howe after the state approved intervention in 2011.

The enrollment decrease led to a drop in state funding for the schools. Charter Schools USA has spent around $5 million to keep Howe, Manual and a third school also under intervention, Emma Donnan Middle School, operating.

Donnan is on course to become part of the IPS district as an "innovation school" in mid-2020 and remain under CSUSA management.

IPS, in its statement, says it anticipates continuing the innovation network school relationship at Emma Donnan.

The release of the 2018 state accountability grades marks Emma Donnan's exit off the failure list. The school, like Manual, is now a C.

Howe remains rated F since CSUSA has been the manager in 2012.

Indiana schools will get nearly $2.6 billion, targeted to those that serve more low-income students. The money offers an unusual test of whether spending more on education will improve outcomes for children.
Read More

The superintendent of the Washington Township Schools districts is asking for the community’s help to end violence after a North Central High School student was stabbed with a knife by another student on the campus Wednesday morning.
Read More

Students who participated in the Indy Summer Learning Labs made significant gains on math and reading tests after the five week program.
Read More 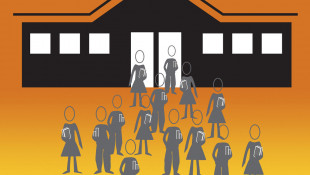 The Takeover is a radio documentary about Indiana's radical move to save failing schools and the impact it has on students and teachers. Across three years, WFYI reporter Eric Weddle explores the promise of school turnaround and the effects of a state takeover at two Indianapolis schools -- Arlington and Howe high schools.