The Link Between Drug Use And Acute Hepatitis

Acute cases of hepatitis C are increasing in Indiana, and public health officials are pointing to injection drug use as the biggest reason.

Acute hepatitis C refers to a person who has a new case of the virus. Many newly-reported cases of hepatitis C could in fact be decades old, since many people can live with the virus for many years without knowing.

Thus, measuring acute case is a way to monitor the rate at which the disease is spreading—and in Indiana, the situation appears to be dire.

State epidemiologist Pam Pontones says the state’s drug problem is behind the spike.

“Hepatitis C transmission among injection drug users is a significant concern, because that is a top way to transmit infections,” she says.

Hepatitis C, or HCV, is spread through blood-to-blood contact. Half of Hoosiers reporting acute cases of Hepatitis C in 2014 admitted to injecting drugs not prescribed by a doctor.

The Centers for Disease Control and Prevention say 30 percent of injection drug users younger than 30 have HCV. In older users, that number could be as high as 90 percent. 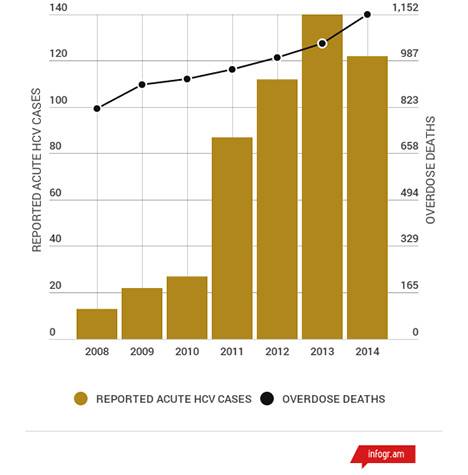 IU Professor and Rural Center for AIDS/STD Prevention Co-Director Beth Meyerson says if the state wants to stop the spread of HCV and drug use, it needs to work from the ground up.

“What is the social conditions that produces the environment where people would start to use opioids?” she asks. “What are the social determinants, economic determinants, social networking determinants, the safety net of systems that would be available to help deter drug use and, on the other hand, help people who are exposed to it?”

Tags:hepatitis Cdrug addictionopioidshep c
Support independent journalism today. You rely on WFYI to stay informed, and we depend on you to make our work possible. Donate to power our nonprofit reporting today. Give now.