The long failing Hoosier Academies Virtual School avoided closure from the State Board of Education at a hearing Wednesday.

Instead, the board approved a lesser punishment – a cut back on the number of students who can enroll this fall.

The online school became eligible for state sanctions, including shutdown, in early 2015. But it’s taken more than two years and three additional state education board meetings for the members to decide to take action.

Yet some board members expressed surprise about hearing about the high rate of student expulsion, more than 800 students in the past three years, and the school's curriculum that does not fully include Indiana academic standards.

None of the seven members present for the hearing advocated for closing the school, though all agreed sanctions were needed. Hoosier Academies director Byron Ernest was appointed to the board in May 2015 – he recused himself from the discussion and the vote.

State superintendent and board chair Jennifer McCormick says the sanctions are not too lenient but she declined to say whether she would have voted to close the school.

“I think it is a very difficult situation. I do agree with the families who are there and want that choice, they are committed to that and want that,” she says. “My big concern is performance. When you hear they are not following state standards 100 percent – that is concerning.”

In two separate votes, the board approved 6-1:

During the hearing, board members repeatedly expressed frustration over, what they say, is a lack of urgency by school leaders, its for-profit management company K12, Inc. and its charter authorizer Ball State to fix academic problems.

Company and school officials offered an improvement plan that focused on increased engagement with students and a better use of data to improve instruction.

“I know you are working on things, and trying to get some things solved,” McCormick says. “But I think it is a shame we are in this situation.”

One of the most glaring concerns by the board is that Hoosier Academies does not fully use the Indiana academic standards that were approved three years ago. Those standards are the basis for end of course assessments, ISTEP+ and other accountability. Instead, it relies on a Common Core curriculum provided by K12, Inc. the Virginia-based for-profit company that manages the school.

When Stuart Udell, K12 Inc. CEO, was asked if Indiana standards were in use for all classes, he repeatedly said that teachers were adding the standards to classes.

“We’ve been working judiciously since we’ve been here on filling in those gaps,” he says

Cari Whicker, a Huntington public school teacher, let out a “wow,” when hearing that the standards were not in place.

“If teachers in my building came to me and said ‘we are 60 percent aligned’ -- that's unacceptable," Whicker says.

Board member Gordon Henry noted that Hoosier Virtual is receiving $24 million from the state in per student funding yet not producing favorable academic results. He said the blame was not students but Hoosier Academies, Ball State and K12, Inc.

"The state is spending a ton of money on failure,” he says.

But fellow board member David Freitas rejected that notion. Ball State, he says, should have been keeping a better eye on Hoosier Virtual and pressuring school leaders to make improvements before now.

In total, Hoosier Virtual has been rated an F by the state for six consecutive years –two more years than required for a charter school to face intervention. During that time graduation rates remained about 20 percent. Last year more than 80 percent of students failed the ISTEP.

Charter authorization for the school continues through the 2017-18 school year and will be renewed in early 2017. Bob Marra, Ball State’s executive director of the Office of Charter Schools,  says he will come before the State Board of Education this fall to discuss whether he will renew the charter.

Tags:State Board of EducationHoosier Academies Virtual School
Support independent journalism today. You rely on WFYI to stay informed, and we depend on you to make our work possible. Donate to power our nonprofit reporting today. Give now.

An educational event at Sand Creek Elementary School on April 17 will give community members the opportunity to learn more about the school's decision to go solar.
Read More

According to a study from the College & University Food Bank Alliance (CUFBA), nearly 30 percent of students across the country experience food insecurity while on campus.
Read More 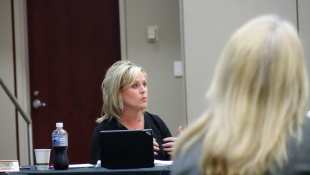 The State Board of Education denied waivers for three voucher-accepting private schools to continue accepting voucher students despite failing grades.