After state issued teacher bonuses gave thousands more dollars to teachers in affluent districts, some teachers in Wayne Township are donating their bonuses to help other teachers.

The state uses a formula to decide how much money each school district receives to award bonuses to all teachers rated effective or highly effective.

But because that formula is mostly based on test scores and graduation rates, teachers in affluent school districts get a larger bonus – a few thousands dollars. And teachers in less affluent districts, such as Wayne Township in Indianapolis, might get around 40 dollars.

Wayne Township superintendent Jeff Butts says many of his effective and highly effective teachers are donating their $42 bonuses to a district fund that helps teachers and students.

“They’re personally going to make that donation to the Wayne Township Education Foundation so that they can continue doing the work of supporting our teachers in the classroom,” Butts says.

He says, so far, 40 teachers in the district committed to donating the money.

Butts says he has set up meetings with legislators to discuss how this money is distributed, to hopefully change the process in the future.

(Read a letter from some Wayne Township teachers to legislators protesting the formula that distributes bonus pay).

Tags:MSD of Wayne Townshipteacher pay
Support independent journalism today. You rely on WFYI to stay informed, and we depend on you to make our work possible. Donate to power our nonprofit reporting today. Give now. 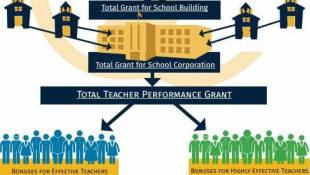 Some of Indiana's wealthiest school districts are being awarded a chunk of a $40 million state fund reserved for teacher bonuses while most urban schools will receive significantly much less.