Survey teams confirmed five tornadoes swept central Indiana's Carroll, Howard, Marion and Montgomery counties on Wednesday, including an EF3 tornado with winds of up to 152 mph that damaged homes and businesses in Kokomo.

Another three tornadoes have been confirmed in northeastern Indiana's Allen, Adams and Wells counties.

Dan McCarthy, the meteorologist in charge of the weather service's Indianapolis office, says no additional evidence of tornadoes is expected to be found in central Indiana.

But meteorologist Amos Dodson in the agency's North Webster, Indiana, office says crews are still surveying damage near Peru to determine if it was caused by a tornado. The Allen County tornado's storm damage is also still being surveyed.

Tags:severe weatherHoward CountyMarion CountyKokomoAllen CountyNational Weather ServicetornadoesCarroll CountyMontgomery CountyWells CountyAdams County
Support independent journalism today. You rely on WFYI to stay informed, and we depend on you to make our work possible. Donate to power our nonprofit reporting today. Give now. 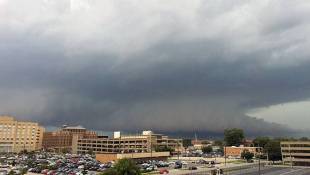 Storms of the size that hit central part of the state Wednesday are fairly uncommon for Indiana, especially this time of year.