MITCHELL, Ind. (AP) — The National Weather Service says surveys have confirmed tornado damage in parts of Indiana from storms that hit the Midwest this week.

The weather service rated Wednesday morning's tornado near Mitchell in Lawrence County as an EF-2 on the Enhanced Fujita scale with maximum wind speeds of 130 mph. The weather service says the tornado was on the ground for about a half mile.

Meanwhile, crews worked to determine the strength of a tornado in southwestern Indiana's Posey County that damaged homes. Officials have said the damage apparently was caused by the same deadly tornado that struck adjacent White County, Illinois, and killed a man.

Tags:severe weathertornadoLawrence CountyMitchell
Support independent journalism today. You rely on WFYI to stay informed, and we depend on you to make our work possible. Donate to power our nonprofit reporting today. Give now.

Logistics Company Plans Up To 500 Jobs In Central Indiana 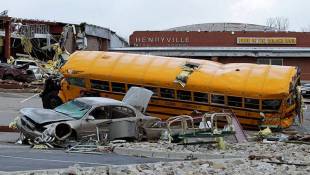 The Clark County Museum in Jeffersonville has been designated the official repository of photos, documents and items related to the EF4 tornado that hit in March 2012.