The West Lafayette City Council approved an ordinance banning the use of facial recognition technology Monday night on a 5-4 vote.

Last month, the council debated the pros and cons of the technology. Council members in favor of a ban cited the technology’s racial bias and the dangers of government overreach. Those opposed noted that facial recognition served as an important tool for law enforcement.

Facial recognition technology uses computer programs to compare individuals caught on video or camera to a database of faces. Privacy advocates say databases of photos can include pictures taken from social media without a person's knowledge or consent.

In Michigan, driver’s license photos are automatically shared with the state police. Misidentifications are rare, but they have led to wrongful arrests.

West Lafayette Chief of Police Troy Harris said the technology is an essential part of police work and noted that banning its use could set the department back by a decade.

“I’m an advocate for privacy and individual rights, but I think we have a right to protect our citizens,” he said. “Someone breaks into your home and you have them on video surveillance or your Ring camera and you give that to us as evidence, if the mayor does not veto it (the ordinance) we’ll be limited in how we can use that as evidence.”

Harris said he takes issue with the ordinance’s framing of facial recognition as a “surveillance” technology.

“I believe that this ordinance is broad and overreaching,” he said. “The headlines tomorrow should be ‘City council passes ordinance that protects criminals,’ in my opinion.”

West Lafayette Mayor John Dennis - a former police officer - reiterated that he would veto the ordinance.

“This was the wrong step,” he said. “Our police department needs to feel supported by the city council. The men and women of the West Lafayette Police Department work their butts off and we need to make sure they understand they are supported and loved by their community.”

Councilmember David Sanders, who introduced the ordinance, said he plans to attempt a veto-override. That requires a two-thirds vote, and currently, he is one vote shy.

“People listen to their constituents, I certainly do, and it could be that people will be influenced in the right way,” he said.

Sanders said it is important for the city to get ahead of facial recognition technology.

“I’m concerned about the fact we’re being watched all the time,” he said. “I believe that protecting privacy is something we should all be concerned about.”

City Council member Shannon Kang, who voted in favor of the ban, said the ordinance will send a message even if it doesn’t take effect. Kang, who also serves as the Purdue Student Body President, said her vote was representative of the student body.

“We’re designed differently in this generation because of the way we’ve reacted to the social justice movements and technology,” she said. “I think it was very telling what sort of experiences each of the councilors have had in the past that have come to this decision today to ban something like surveillance technology.” 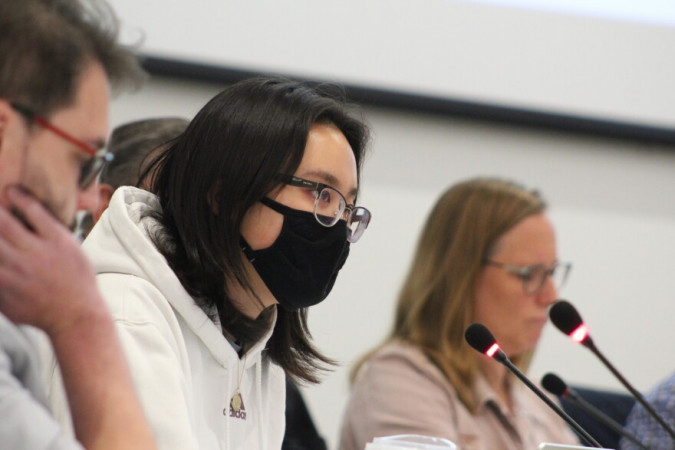 Tags:West Lafayette City Council
Support independent journalism today. You rely on WFYI to stay informed, and we depend on you to make our work possible. Donate to power our nonprofit reporting today. Give now.

The Perseids meteor shower has been observable for about a month, but visibility will peak this Thursday or Friday.
Read More

Holcomb calls special election to fill Walorski vacancy, to be held along with general

The cities of Clarksville and Richmond worked with Indiana University last year to find out what parts of those communities get the hottest and who is most vulnerable to extreme heat. Now they've come up with plans to "beat the heat."
Read More