Why This Group Handles Grief By Boxing 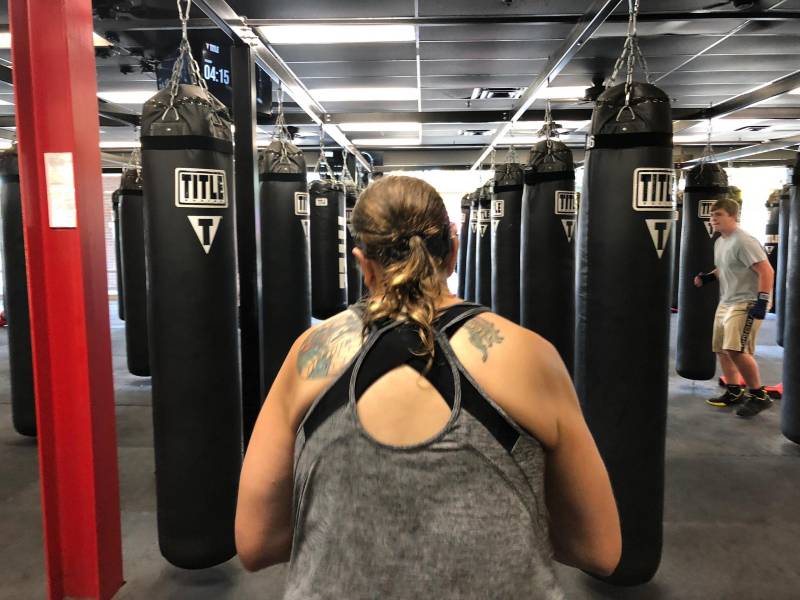 It’s a Friday evening and a dozen or so people -- men, women, teenagers, little kids -- are gathered at TITLE Boxing Club. It’s an upscale boxing studio near a largely vacant shopping mall on Indianapolis' northside.

“The first punch that’s called a jab,” club trainer Mark Stuaan says as he leads a demonstration, “So everybody give me a jab. There you go, there you go.”

They’re here for a class run by Overdose Lifeline, which supports families dealing with addiction. Now, this organization is helping people cope with grief in a way that’s unexpected: boxing.

Overdose Lifeline has run a grief support group for years. The boxing class is relatively new, and is open to people dealing with all kinds of grief. 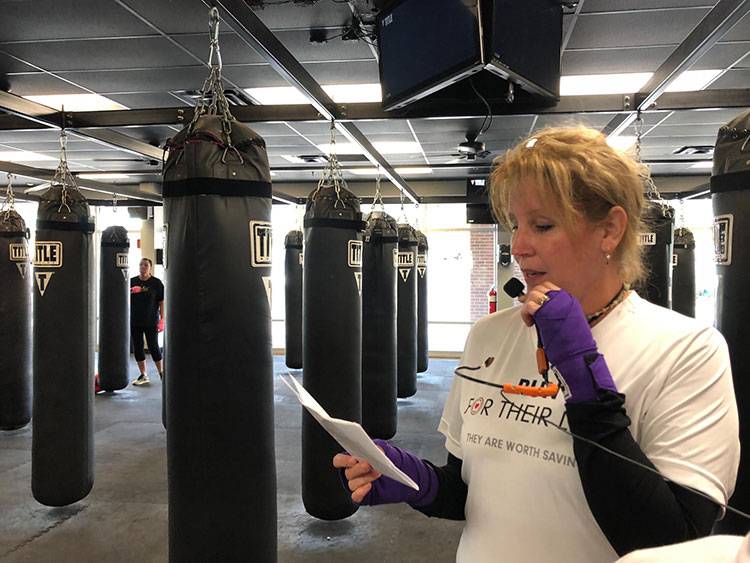 “One of the major things that we kept seeing as a pattern of anger,” says Stephanie Lowe Burry, the organization's grief support group counselor. “So anger that our participants, our members, felt toward the dealers, toward the addiction, toward themselves, toward community.”

She says the group experimented with ways to release anger. That's when she realized boxing could be a useful tool.

“We tried different things in our group, like breaking plates and things like that. And that was, it was effective for a little bit,” Lowe Burry says. “Then we decided to start grief boxing.”

In the studio, several dozen heavy punching bags hang from the ceiling. They're long, nearly touching the athletic mat on the ground. As class members land punches on the bags, the room fills with a high, almost-rhythmic staccato sound.

Stuaan runs through the basic boxing moves and a bell signals the beginning of the four-minute round. Between rounds, Lowe Burry guides participants through different meditations.

“It takes tremendous courage to be here tonight,” she reads through a microphone. “It takes courage to get out of bed to get through the day, to remember that you are now a part of this group to which nobody wants to belong. Your journey might feel isolated and alone. But tonight, you are not alone.”

On one of these punching bags, Erica Watkins scrawled “Joey” down the side with chalk.

Watkins found out her son had an addiction just 10 months before he died. She describes Joey as a talker who loved to make people laugh.

“I had gone to some other grief classes that weren’t associated with opioid loss. And I felt pretty out of place there. Judged, maybe looked down upon,” Watkins says.

That’s when she found Overdose Lifeline. Eventually, she was in the group's first grief boxing class.

“I didn't even have any workout clothes. I just had shorts and I had my Chuck Taylors and a tank top on. I show up for the class and we hit the heavy bag so many times I thought I was gonna die the first time,” Watkins says, laughing.

For this class, Watkins is wearing athletic clothes that reveal a shoulder tattoo in honor of her son. She has purple boxing gloves -- purple, because that’s the color of overdose awareness.

“When you lose somebody like I did, you can get angry about it. It's not fair. It's not right,” she says. “But when you're boxing, it gives you the opportunity to take it out on the heavy bag.”

Now Watkins — with her purple gloves — is a regular at TITLE Boxing.