Pyle was reporting on the U.S. Army’s 305th Infantry Regiment when he was killed on April 18, 1945, on the Japanese island of le Shima.

Braun said last week that “Ernie Pyle is an American hero who gave his life in World War II and it’s only fitting to name the post office in Dana, Indiana after him.”

After studying journalism at Indiana University, Pyle won a Pulitzer Prize for his reporting on World War II.

The bill was introduced last week.

Tags:Ernie PyleTodd YoungDanaU.S. Postal ServiceMike Braun
Support independent journalism today. You rely on WFYI to stay informed, and we depend on you to make our work possible. Donate to power our nonprofit reporting today. Give now. 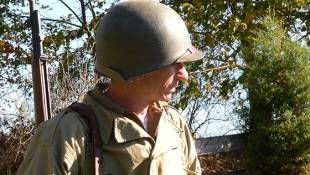 He was known as “America’s storyteller.” Throughout the country’s most tumultuous times, more than 40 million Americans sought solace in the plainspoken words of Ernie Pyle.

The Pulitzer Prize-winning journalist from Indiana delivered his first-person reports from the foxholes of Europe...