Young will be the first person to hold this Senate seat since 1989 who isn’t Coats or Bayh. He won with 52 percent of the vote, to Bayh’s 42 percent.

In his victory speech, Young told supporters at the Indiana GOP’s election night party that his win proved the power of democracy.

“Tonight was a reminder that our charge in the United States Senate is to serve you and people like you across this state and across this country,” he says. “And starting tonight, you’ve sent in a Marine to solve problems.”

And he attacked Bayh for supporting those policies, and for the past six years he spent consulting for a D.C. lobbying firm. That was the focus of tens of millions of dollars Republicans spent on negative campaign ads that have blanketed the state since August.

At the Indiana Democrats’ election night event in Indianapolis, Bayh supporter Justin Allen agreed that leaving Indiana politics for a consulting job with a Washington D.C. lobbying firm may have hurt Bayh at the polls.

“The way that he left and kind of came back – I just don’t think that sells well in the current political climate,” Allen says.

But Bayh, in conceding the first loss of his long political career, remained upbeat.

“As we nurse our disappointments, tomorrow, reach out to those who perhaps voted in a different direction, because they are not our adversaries,” Bayh says. “And in spite of what some people may tell you, we have more in common than divides us.”

Bayh’s loss also didn’t help Democrats regain a majority in the Senate – other key swing races fell to Republicans, who will hold onto Senate control.

Young will be part of that majority, working across the aisle with now-senior Democratic U.S. Sen. Joe Donnelly, who will face his first re-election bid in 2018.

Tags:Election 2016Todd YoungU.S. SenateEvan Bayh
Support independent journalism today. You rely on WFYI to stay informed, and we depend on you to make our work possible. Donate to power our nonprofit reporting today. Give now. 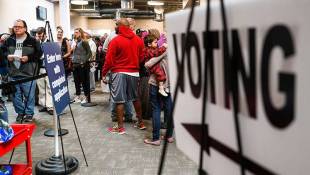